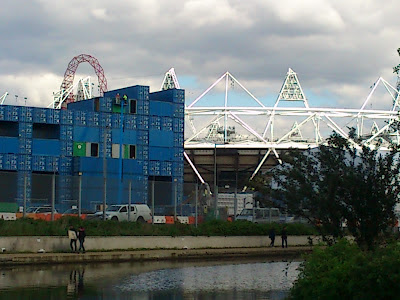 The twenty-one narrow locks of the Wolverhampton Flight are OK for a warm up, but for a real work out, you need to head south, as I did on Saturday. My friend Mike (previous owner of Andante, my first narrow boat) has a small trip boat business in London, and as he had rather a long day in prospect, I went down to give him a hand with the locks.

The plan was to take a stag party from Little Venice out to the Olympic site on the River Lee - the towpath is now closed down there, but you can still get a decent view of the ever-changing site from the river, and then to come back with some (unrelated) hens. There and back totalled about seventeen miles, and 22 big locks.

It was a lovely day for it and I was really pleased I went. Boating through London is a completely different experience. Not only are the locks bigger, but they are populated by boaters the ineptitude of whom Midlands navigators could barely dream of.  Come sunset, there seemed to be a barbecue set up at every lock as well. Everyone was very amiable though, and it was useful to have some extra bodies around for some of the bottom gates.

I went down by train and met Mike and Lady A at Hampstead Road lock, co-ordinating our arrival to within five minutes. I'd brought my own windlass, but thought I'd better not get it out on the tube.

I'd only been down the Hertford Union Canal once previously (on Warrior in 2008) so it was nice to revisit it. Once out on the river, we stopped short of Old Ford Lock - the electric lock is out of action for maintenance, and the manual one so hard to operate that BW assistance has to be called in. There was a brief moment of drama when we were told that there was a swan trapped in the empty lock - without a good run up for take off, there was no way it could fly out, and it was getting distressed. Mike made a call to the BW emergency line, and was quickly rung back by a local person who said that they would come and refill the lock so that the swan would be able to get out. 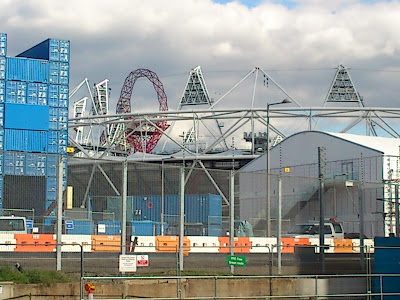 From the river we could see the Olympic stadium, and the top of the 'Orbit', as well as a container development in progress. 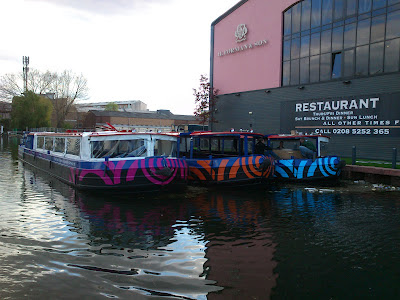 We also got a sight of some of the fabled Olympic Water Chariots - originally touted as a waterbus to the Olympic site, these are now being advertised to corporate clients at up to £75,000 a day. The boats are actually quite basic inside - you can see even on Water Chariots' own website that they are not insulated or lined out. Perhaps they are not officially finished - which would justify them displaying trade plate licences. 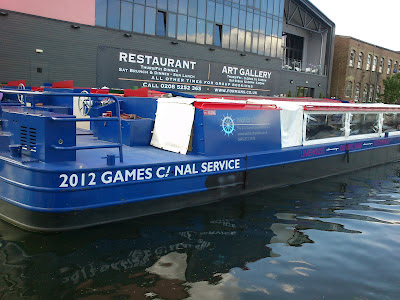 It will be interesting too to see what becomes of these behemoths after the brief period of the games. With the best will in the world they could not be described as good looking boats... My money is on some new London hippy houseboats. 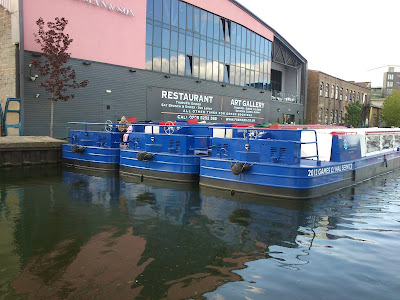 After dropping the happy hens off at City Road Lock we boated on into the dusk. It was dark by the time we went through Camden, and there were surprisingly few people around, given that it was such a pleasant evening - surely the mildest of the year so far. We got back to Lady A's fantastic mooring in Little Venice at eleven, having hit every point of the day's itinerary exactly on schedule. It was an excellent day and I'm looking forward to doing it again soon. 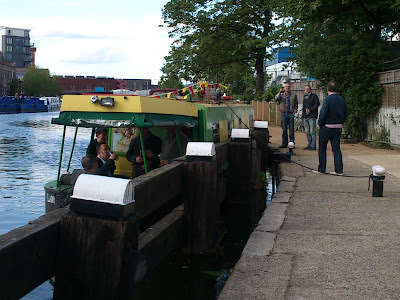 And if you're looking for a friendly and informal London canal boat trip for up to twelve people, do give Mike a call. 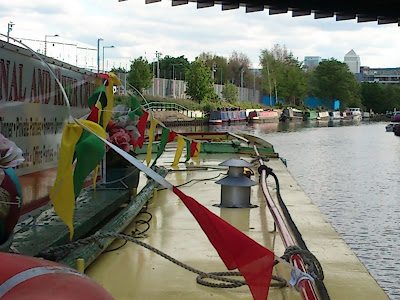 STOP PRESS: Diamond Geezer has been musing about the Water Chariots today too.
Posted by Sarah at 20:41