With Sebastian (No. 2 son) and his girlfriend due to visit at the end of the month (after he finishes his Philosophy Finals!) I was becoming increasingly aware that we still didn't have a spare bed on Bakewell. When Baz visited before, he had an air bed on the back cabin cross bed, and it went down. Now, he's a tough little chap but you can't knowingly ask someone to do that twice.

So I had measured up the bed and we were all set to go to Penkridge market this morning, where I had noticed the other week there was a stall specialising in boat and caravan upholstery. Given that I paid over £100 just for the foam for Chertsey's mattress, I wasn't expecting it to be a cheap turn out.

Then last night I was idly browsing Canalworld (my latest self-imposed exile having come to a decisive end) when I saw this (you'll need to click to enlarge it):

A few posts and emails were exchanged, and this morning we drove to Kenilworth where I was delighted to meet CWF stalwarts RLWP  and Mrs Tawny Owl (aka Richard and Sue), and to take possession of some very fine foam cushions. Tawny Owl is a former hire boat, and these were surplus to requirements, but, as you would expect, high quality, and very well upholstered in sage green Dralon. 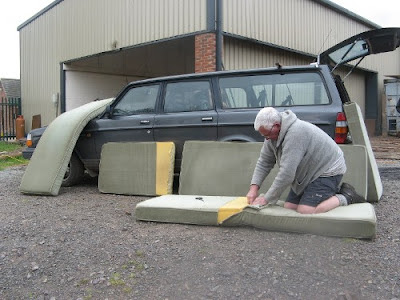 As soon as we got back to the boat the tape measure came out, and then the knife 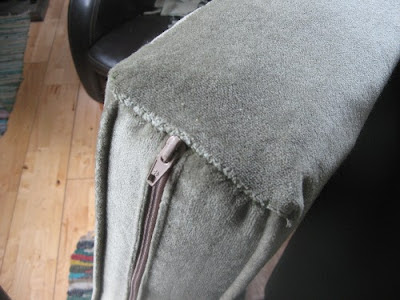 Closely followed by the needle and thread as I folded and stitched the Dralon, which I had deliberately cut about six inches longer than the foam, to make three new cushions exactly a metre (i.e. 3'3") wide which perfectly fit the cross bed. Stood on end, they all fit away into the bed cupboard as well. They were slightly tapered in shape, which I was able to use to advantage in getting the combined length of the three cushion mattress to fit that of the bed. 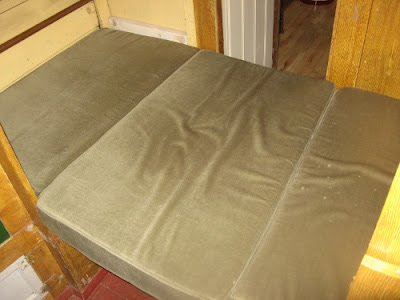 Not only a good deal cheaper, but a lot easier than making covers from scratch as well. And there is one more large cushion left unused (which I have a use in mind for) plus the other halves of the three we cut up (yes, they were 6'6" long) which might be useful on Chertsey or as further guest accomodation.

And on top of that we got to meet some CWFers as well. So thank you very much indeed Richard and Sue, and I hope you will be pleased to see that your cushions have been put to good use already. And I'm sure Sebastian and Izzi will be very pleased as well.
Posted by Sarah at 20:42