Today at last Chertsey's cloths arrived, along with a set of top planks made by Pete Boyce, all delivered by him, and fitted with his help.

Firstly the sidecloths were unrolled along the gunnel. Chertsey's are in a single length along the whole of the boat, shaped at the front to accommodate the inward curve of the fore end. Some people have their sidecloths in two or three sections, so that separate areas can be rolled down, but we thought single ones would be fine for us. In the end we chose heavy duty pvc, as used for lorries' curtain sides, in preference to Regentex (expensive, and we've had mixed reports about its waterproof qualities), 'Top Gun' (looks good but very expensive) or traditional cotton canvas (leaks and rots). The pvc has a side which shows the weave of the reinforcing canvas, and I would have preferred this to be on the outside, but the cloths have been made with a less shiny, but textured outside surface. Never mind though, it only notices if you look really close up. 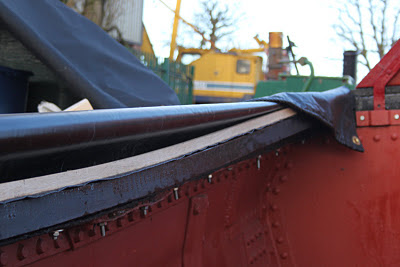 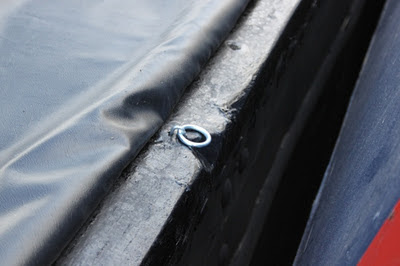 Before pulling the sidecloths up into place, Jim attached the rings for the topcloth strings, positioning them over the notches in the gunnel he made last week. Then I attached lengths of (temporary, I hasten to add) blue string to the eyelets all along one side of the sidecloths. 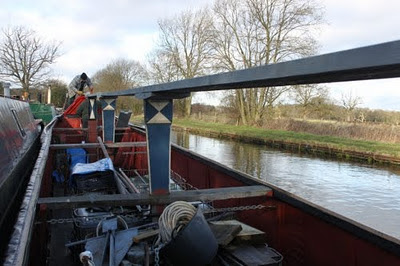 Meanwhile, Pete and Jim were positioning the top planks, and cutting the foremost one to fit. We were delighted that the height of the stands, the back end beam, and (after a little adjustment) the mast meant the top planks ended up beautifully level. Thanks are also due to Adrian (now of Warrior) who measured the lengths for each plank - they were dead right (of course!). 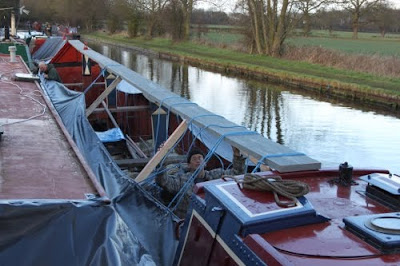 Once the top planks were laid in place, 'uprights' were inserted between them and the gunnels, to provide support between the stands and extra rigidity. 'Upright' is a bit of a misnomer, as they actually fit at about forty five degrees. Chertsey came with four original uprights, each stamped with their position (P1, P2, S4 etc) and a Grand Union Fleet number. Maybe in the past these got swapped about, because we have one numbered 130 Chertsey), one 134 (Carnaby) and two 101 (Aber). We tried using these but only one fitted - amazingly, it was the one that was originally Chertsey's. Pete trimmed the Carnaby one to fit also, so we have two original GU uprights (the stands are marked with GU fleet numbers too), but the two 101s were not in good enough condition to use, so the remainder were made new. 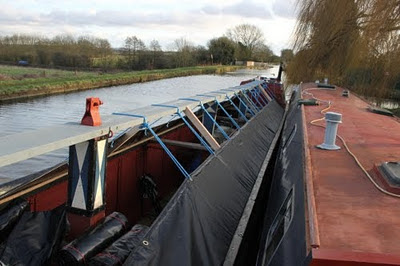 Once all this was in place, the sidecloth strings were thrown over the planks, through the cloths then other side, back over and tied tightly, holding it all in place. We unrolled one of the topcloths for a look, but as we didn't have the strings made up for them yet, we rolled it up again. Tonight we are a hive of sore fingered splicing industry, as we get on with making them - this time properly, in 10mm hempex. So here's hoping the wind drops so we can have a go at fitting the topcloths tomorrow.
Posted by Sarah at 20:31