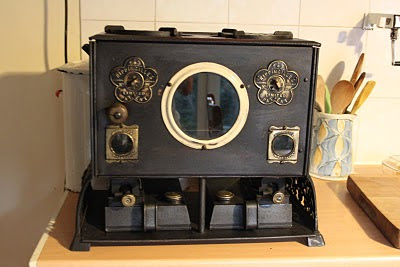 Oh, we have been buying some things (I know I never posted the promised photo of the inappropriate bling, but we'll get there in the end. This is even more exciting).

It was Jim MacDonald, on Elizabeth (a fascinating boat) who said, when I was complaining at Alvecote about the Primus, that we should get a Beatrice stove. So we did (although not as nice, or indeed as cheap, as this beauty, albeit the same model). When our paths crossed again at Retford, I mentioned how pleased I was with it. Jim (M.) then said that he'd spotted a Rippingilles stove at Newark antiques market the previous week. Too my shame, I had never heard of one of these, although they get a (relatively) famous mention in Erskine Childers The Riddle of the Sands, which I immediately downloaded onto the iPad and began to read. I also Googled a few pictures and decided that this was definitely something worth looking at, so as Jim had just collected the car from Alvecote, we hopped in and set off from Retford back to Newark last Thursday. The market was somewhat denuded as there was a big event on somewhere else, and I though that we wouldn't see it after all, until Jim (C.) nudged me and whispered 'behind you!' and there it was. Having seen it of course we had to buy it. 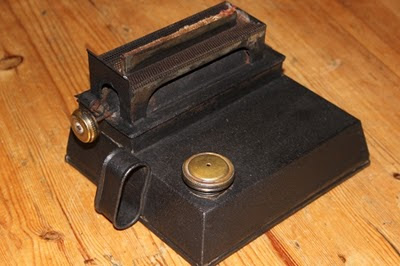 It's in astoundingly good condition and looks as if it's never been used, although I suspect it's lost its original hotplates. It is, of course, paraffin fired. It has two tanks/burners, each with a 4 1/2 inch wick, two hotplates on the top and an oven in the middle. They were made by the Albion Lamp Company of Birmingham, from around 1880 onwards. Not many were sold in Britain as by this time most households (at least those in the market for this sort of thing) had gas - at least, so Wikipedia tells me. But they were a big hit in the colonies as you might imagine. My reproduction 1907 Army and Navy Stores catalogue carries four or five different models, as well as some gorgeous enamelled heating stoves. None seems to have the ornate cast iron sides of ours though.

It is destined for Singapore, where it should look absolutely gorgeous. As to whether it will cook, that remains to be seen. It seems a shame to put a match to those wicks after all these pristine years. Isn't it wonderful though.
Posted by Sarah at 21:25