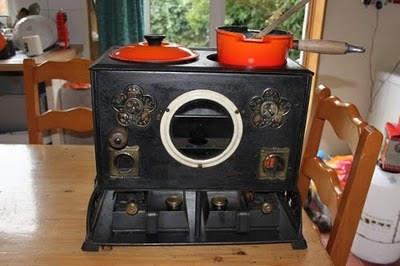 See the warm glow in the little right hand window...
This morning the time had come to try out the Rippingilles stove. Last night we half filled the tanks with paraffin, and left them sitting on newspaper overnight. As I had feared, we discovered this morning that the left hand one has a slight leak from one corner, but hopefully Jim will be able to solder it. It really does seem as if this stove has never been used before.

The tanks/burners fit in so tightly under the oven that it would be impossible to light the wicks and then slide them in, so although they seemed pretty immoveable, we reckoned that the mica windows inside the oven must slide open for lighting, and after a drop of WD40, this proved to be the case. 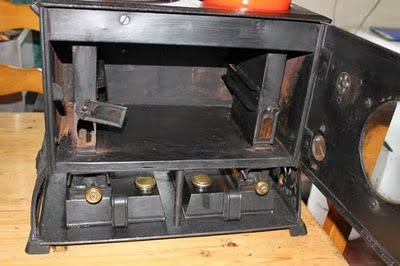 The porridge was very slow to cook; slower than on the double Beatrice at least, but that's hardly surprising. I think it might be slower than a single Beatrice burner too, but I'd have to test it out further. The wick is the same size but I suspect the Beatrice has a more efficient chimney arrangement. I put a small tin of water in the oven and that was definitely getting warm, but then I had to turn out and remove the leaky tank so gave up on that experiment. This chap has baked bread rolls in his though. I wonder also if there's scope for putting some insulation inside, between the burner chimneys and the outside casing, directing more heat into the oven and keeping the outside cooler.

In The Riddle of the Sands, which I have now finished, they move the stove into the saloon to keep warm, where it covers everything in soot and oil, and smells. Can't wait!
Posted by Sarah at 20:27