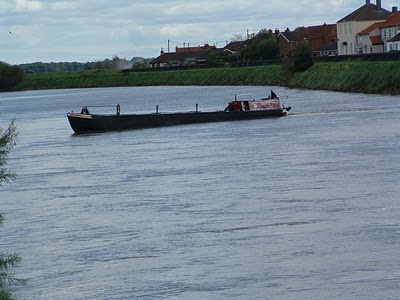 As I mentioned at the time, Adrian and Linda were waiting to welcome us at West Stockwith, Adrian armed with his camera (lucky it wasn't video!). We subsequently discovered that all the other historic boats had stopped on the wall and been pulled in on a rope at slack water. We hadn't really thought of mentioning that we were a historic boat, and none of the lock keepers further upstream had said anything, so we just attacked it as we had on Warrior two years previously. Now, that went remarkably smoothly - a combination I guess of luck and Warrior's powerful engine - but we were still approaching it with some trepidation having heard many tales of how difficult it is; worse than Keadby, some say, and there was no way I wanted to repeat the Warrior Keadby experience, especially in a rivetted boat. 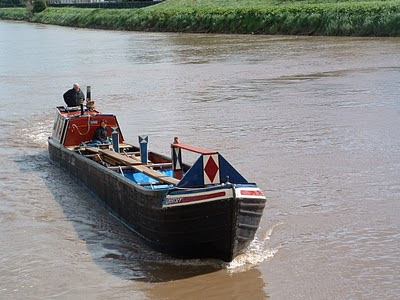 We set off downstream on a falling tide, and once again arrived earlier than expected (it would be helpful actually if the lock keepers told you when to arrive, rather than when they think you should leave, as there is such a range of different possible speeds) and it was still flowing fast; it was a big tide anyway. With less power than Warrior, and more length to be caught by the current, it was always going to be harder on Chertsey to repeat the feat. Trying to steer straight in, we were swept past, and so had to turn into the flow and come back upstream into the tide. The worst bit about this was worrying about getting too close to the bank and running aground. The other danger of course was hitting the wall. Fortunately we did neither; Jim held his nerve and after a bit of a struggle got us into position to get into the lock without hitting anything. Sadly, by then Adrian's camera had run out of memory so that small triumph was not recorded for posterity. 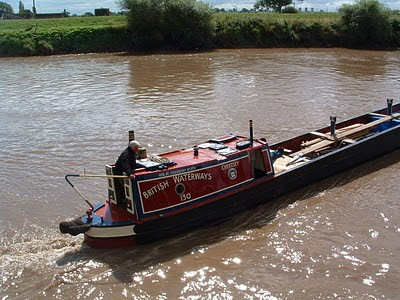 Many thanks to Adrian for the photos here; just a small selection of the ones he took.
Posted by Sarah at 19:56