Many thanks to Alan for sending me some photos of Chertsey in both the Saturday and Sunday parades. (You might have noticed that I have hardly any boaty photos from Braunston this year. This is because I determinedly took my old 35mm SLR camera with the intention of using up my final half dozen rolls of film - in the event I was so busy I only got through one and a half. But all the same, not many digital snaps). 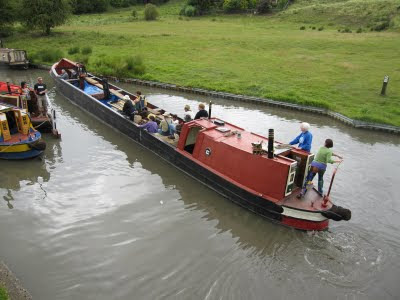 This is us having just come out of the marina under the Ladder bridge on Saturday. This manuoevre was completed perfectly (even if I do say it myself) largely because sheer luck left us in the right position after lots of waiting while boats not involved in the parade were 'bypassed' through the marina. You can see that I'm 'rowing' the tiller. Some people say it works; some say it doesn't. It must depend on the boat because I can say with certainty that it does work, as a way of bringing the front of the boat round at very low revs, with hardly any forward movement. We got round the moored boat on the offside without having to reverse. 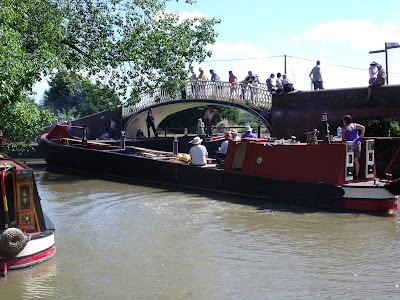 This is us attempting to go into the marina on Sunday. This time Chertsey didn't start in the right position and I made a bit of a mess of it, compounded by the fact that the engine then stalled. Nonetheless we rescued the situation by dint of Halfie fetching the long rope from the T-stud and Tony hopping off and pulling the front round, so that by the time Jim had restarted the engine we were round the turn and ready to steer through the marina. What a team!
Posted by Sarah at 08:55