For those who can't quite face the gruelling BCN Marathon Challenge, Braunston this year offered an alternative test of nerve and patience, otherwise known as the 'Parade'.

Prior to last year, all the boats present participated in a single parade, which became known and dearly loved for its chaotic nature. In 2010, when ninety-plus boats attended, a new regime was implemented of twice daily parades, with half the boats taking part in each (although the year's featured boats in the basin can go in all of them if they want). This was felt to have worked exceedingly well, so was reproduced this year.

Thus it was that Chertsey was ready at eleven o'clock, all passengers aboard and engine fired up, ready for the off. Now if I'd had a bit more experience of this I would have known that being tail-enders in our spot by Butchers Bridge, it would take a while before we actually moved off. I wouldn't have reckoned on it being two hours though. So... we finally set off at one. The parade course runs from a given boat's starting point down the canal to Braunston Turn, where we... turn. We then come back up as far as the main Marina entrance where we turn in, turn left and negotiate between the pontoons to emerge at the other end under the ladder bridge back onto the canal, to resume our original position. This route I would guess would normally take ten to fifteen minutes. We were back in our place at twenty to five. Ahem. Most of the hold ups appear to have been caused by boats getting stuck on the bottom, a fate which fortunately did not befall Chertsey. Because the going was so slow, I was able to manouevre quite impressively (certainly better than on the Sunday), and had a wonderfully appreciative audience of (latterly cross-legged) passengers - Bones and two friends, Neil (who has written a great post about it) and Kath from Herbie, Caspar Ghost and his brother Sleepy Hollow (OK, Gary and Kevin) from CWF plus Gary's daughter; Bill and Michelle from Shilling, and Adrian and Linda, now of Warrior. Afterwards we repaired, naturally, to the beer tent where people and conversation ebbed and flowed delightfully until it was time for day visitors to leave for home.

We returned later to the beer tent, but once again the experience was spoiled by what could have been a good band had they not been massively over-amplified. Does anyone really go to Braunston to listen to a band? Surely people would rather talk with the friends they meet only sporadically as boats' paths cross throughout the year. On the Friday night there was a band that wasn't even good, and despite the rain many people preferred to stand outside, in waterproofs and under umbrellas, with their beer getting increasingly watery. Still, if there's one group of people who aren't going to be deterred by a drop of rain...

The weather on Sunday in contrast was scorchingly wonderful. This time we were in the afternoon parade, and I was banking on a lot of people not bothering. I don't know how much numbers were down by, but we certainly accomplished the course a lot faster (within two hours I reckon) and commensurately less gracefully. Thanks are due to Halfie, and Tony (Wotever) who saved the day with a long rope (and me who had the foresight to put it there ready for just such an occurrence) when I managed to stall the engine whilst cocking up the turn into the marina, and to Jim (Chief Engineer) for restarting it both then and when it stalled again as we were coming out. So, less pretty, but we still managed it without major incident. Moveable ballast on Sunday comprised Tony and Patti (who brought wine and chocolates which I hid away for later, mmm, thank you) and Halfie, (who brought beer, which we drank, and very nice it was too). We were also joined on Sunday by No. 1 son, his partner and little Eloise, who seemed to thoroughly enjoy herself. This is of course just the start of my indoctrination of her... 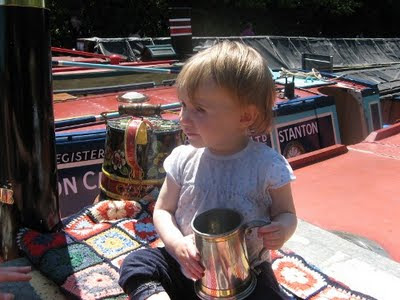 Of course Braunston is also a marathon of non stop partying and on our return from the Sunday parade I wondered over to the marina and ran into Alan and Cath (Sickle and Chalice) and, a lovely surprise, Graham and Jane (Alnwick). We stayed chatting so long that we were given free beer, clutching which we wondered back to Chertsey to chat some more. Then after they left to find some dinner, we got into conversation with Nick Hill, and it was nearly nine when we rushed into the Nelson just in time to order food, Bill and Michelle, whom we were supposed to have been meeting on the way, having very sensibly given up waiting and were already in there.
Posted by Sarah at 14:41