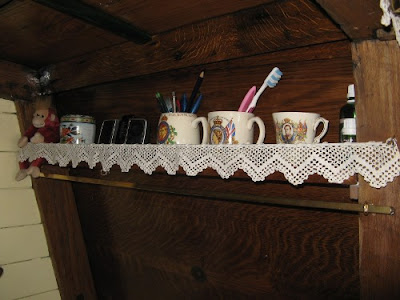 One accusation that can't be levelled at Jim is a failure to get around to putting shelves up. No sooner had I said that I thought that a small shelf over the bed would be a nice addition to Chertsey's cabin (and provided him with the measurements) than a suitable piece of wood was found, cut to shape and varnished ready for installation.

Meanwhile I had found a suitable piece of lace and a length of net curtain wire, the primary purpose of which is not to look decorative (although it does) but to stop things falling off. My collection of coronation mugs is additionally Blu-Tacked in place for added security. I couldn't wait to get these out - two from 1937 (including one, the little Edward VIII one, which was owned by my father from that date) which is of course also the year that Chertsey went into service - and one from 1953. They've had to earn their keep as repositories for pencils, toothbrush etc - there's little space for anything purely decorative - but I think the whole corner looks lovely now. I've repositioned the brass rail underneath for hanging neclaces and suchlike on.
Posted by Sarah at 21:38