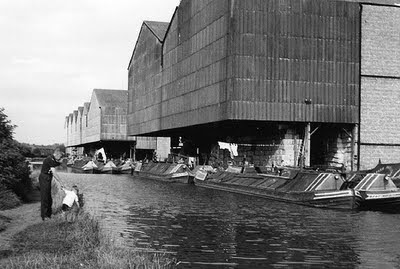 Croxley Mill, somewhat earlier than Chertsey's delivery there. One of my favourite photos, reproduced by kind permission of Diamond Geezer.


I have on my desk a photocopy of a faint page from a duplicate book. The original writing has been gone over to make it legible. It says: 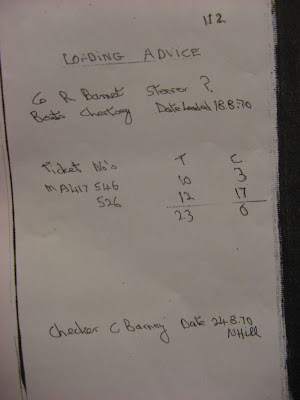 (I haven't reduced the photo so if you click on it you can see a bigger version.)

The story, in which Chertsey plays a small part, of the attempts by the Ashby Canal Association to keep the canal open by securing carrying contracts, is told by Gerald Box in Clinging On: The Moira Cut, Coal, and the Last Days of Carrying. (Available from the IWA shop). It's not sparklingly written, as the title might betray - I believe it started life as an MA thesis - but it's fascinating reading for anyone with an interest in the last mini-rennaissance of canal carrying in the late sixties.

This was a time when the big companies had long since given up trying to make canal transport pay (as early as 1949, after the Docks and Inland Waterways Executive - later to become BW - had taken possession of the GU fleet as part of the nationalisation programme, the biggest independent carrying company, and one of the oldest, Fellows, Morton and Clayton, had voluntarily sold out to them). Smaller outfits, with what we would now call leaner operations, such as Blue Line and Willow Wren had entered the fray and taken over a number of boats from the rapidly dispersed BW fleet in the fifties and early sixties, but by the late sixties they too were feeling the pinch, as more and more cargoes were moved onto road transport. Factory arms were being closed and filled in, and canals across the country were being effectively, and often legally, abandoned.

By 1970 Blue Line was just about hanging on - their 'Jam 'ole Run', which ended in November 1970, is generally held to have been the very last regular long distance traffic - but increasingly the few remaining traffics were being carried by the new No. Ones; rather different perhaps from the traditional, proud owner-operaters of earlier years; people, often young people with no canal background who had purchased a boat in one of BW's regular disposals and dreamt of a life working the cut, 'following the trade' to use Tom Foxon's term; picking up loads as and when they could, and hoping to do no more than sustain themselves but to find their reward in the hard but attractive lifestyle of a boatman.

One such young person was Richard Barnett. In 1969 he was a newly qualified accountant, but presumably the prospect of a lifetime spent in some back office did not appeal. So he purchased Chertsey - not direct from BW, as they had disposed of the boat in 1962 or 1963, but from the subsequent owners (and who they were remains a bit of a mystery, these being Chertsey's 'missing years'). Richard Barnett's business partner at this time - unofficially, for reasons that will become apparent - was a student called Richard Pearson. It was in fact the latter Richard, who had barely steered a boat before, who was entrusted with bringing this 23 tons of coal from Gopsall Wharf on the Ashby Canal (on the Leicestershire/Warwickshire border) to John Dickinson's paper mill at Croxley on the Grand Union near Watford. Nick Hill has the steerer down as ? on the loading note; I was able to tell him that it was Richard Pearson having met Richard at Braunston last year, when he told me the story.

The continuation of this contract represented a victory for Nick Hill (he who signed the loading chit nearly forty one years ago and who was helping to fit Chertsey's new gunnels the week before last) and others on behalf of the Ashby Canal Association. Keeping traffic moving on the canal was primarily begun as a means of keeping it open, preventing it from silting up, being choked by weed, and being abandoned, after its upper reaches were closed by mining subsidence. After Willow Wren pulled out, the Ashby Canal Association formed a trading arm and took over the contract with the paper mill itself. It then subcontracted the carrying to anyone who was willing and able to take it on. The story of the chutzpah with which they achieved this, and through it their ultimate aim of keeping the canal open, is worthy of a post in its own right.
Posted by Sarah at 20:13