Warrior sails into the sunset 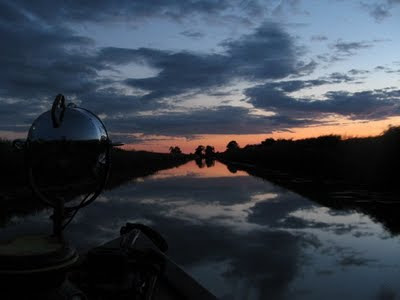 It's been a bittersweet weekend, with a few tears, as we've cleared our goods and chattels from Warrior ready for its new owners. One thing we can't be accused of however, is taking the lightbulbs with us - in fact we are leaving what must be a lifetime's supply of spare bulbs.

As the Moomins were at Bill Fen as well, we decided to take a valedictory trip to the George at Ramsey Forty Foot. This pub has changed hands so many times since we started visiting (and this visitors' book has been lost and found again) but I think last night saw it at its best ever. Friendly service, excellently kept beer and decent food at very reasonable prices. It was empty when we arrived but shortly after we ordered, a family group sat at the next table. There was soemthing so familiar about the man I could see, I thought he must be a boater I'd previously encountered, but I couldn't for the life of me think of where. Then one of his party asked him 'When do you start rehearsals' and I realsied that if he was an actor, I'd most likely seen him on the TV (which I haven't watched for ten years now), and for some reason my first thought was The Bill (perhaps because every actor in Britain has been in it at least once). Over the course of the evening I becam certain this was where he was familiar from, and indeed, when I got home and looked at some pictures, confirmed that he was indeed Tony O'Callaghan, who played Sgt Matthew Boyden. Further research solved the mystery of what he was doing there of all places - he grew up in Ramsey. I think however that David Trimble remains the most important, if perhaps not actually the most famous, person I've encountered in a pub while boating - and I actually spoke to him.

We left around ten and navigated after dusk in brazen contravention of the Middle Level byelaws. Despite a heavy coating of weed, Warrior cut through the water as smoothly and as beautifully (and as fast) as ever. Moominpapa and I both captured the occasion - me on my ancient Canon PowerShot A700, and Moomin on his HTC Desire. His is sharper, but bluer. 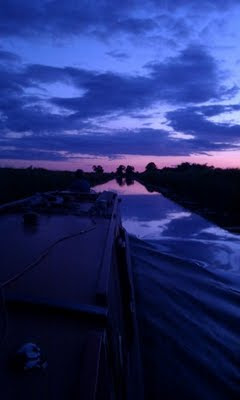