Well here we are at last 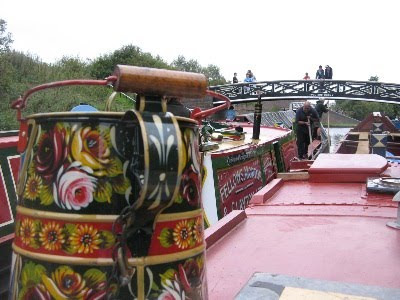 Or, I guess, Windmill End. Determined not to be caught napping this time we were up at five, having spent a peaceful night on the offside mooring. We had time for a cup of tea though and left at about six. This was possibly the best time for my first sight of this section of BCN industrial dereliction, ghostly in the misty dawn light. We chugged along quite happily (a few tricky turns, but more water than there might have been, and - so far - nothing on the prop) until we caught up with Minnow, who were having trouble with their water pump. We went on ahead for a couple of hours, waiting for them at the bottom of Factory Locks. After a while along they came, having effected a temporary repair on the guilty spring. But when we got to the mouth of Netherton Tunnel they stopped again; this time it was broken beyond repair - so out came the cross straps, and Minnow was hitched to Chertsey, and Blossom steered them both through the tunnel. It's not a very interesting tunnel, but on the plus side it's nice and wide and straight. Interest (e.g. bendy bits, narrow bits, low bits and sharp bits) as a feature of tunnels is somewhat overrated, I think.

Once out of the tunnel, there we were here, and practically on our alloted mooring spot. So we banged in the pins and tied up. First impressions - the dog shittiest towpath in England... second; it's going to be noisy, with music one side and a funfair the other. And lots of kids... But we've also caught up with Dove and admired their new cloths; I think I shall almost certainly get mine done by the same person, Sam, who's based at Braunston. They're Regentex, which I much prefer to the shiny vinyl which looks too much to me like lorry curtains, and which I gather with careful maintenance can last a good long time.

Stop press! Blossom has acquired a new spring! And I must prepare some tea beforre we repair to the beer tent, as it looks as if the food outlets won't be set up in time.