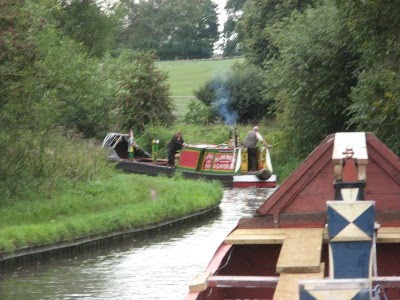 No, it isn't very far, is it. The day started well, chez Chertsey at least. I finally used my bike for its intended purpose and pedalled off down to the Spar shop, where I bought the paper, and crusty rolls and croissants and jam. I'd lit the stove and put the kettle on before I left and came back in time to make the tea and warm the croissants in the oven. Southern softy boating at its best! Then while we were waiting for Minnow, Brian ex of RN came by on his tug Kyle, and stopped for a cup of tea and a chat.

Then Dawn texted to say that Minnow was up and running so off we set. Everything was OK until we got above Tixall lock, and then suddenly there was hardly any water; it was worse than on the Coventry earlier this year and that was bad enough. Even in the deepest part it was shallow enough to feel things on the botttom, and straying from the channel guaranteed getting stuck on the mud, and later, on big lumps of stuff.

This might have been copable with if it weren't for the conspiracy of the wind to push us into the side and onto the mud/lumps almost continually. Minnow was affected too (although obviously far more skilled in dealing with/avoiding it), and by half past three we decided that we'd had enough of basically taking turns to pull each other off. Hon mensh of the day goes to the patient folk on board Shy Swan who not only pulled us off, but when we finally gave up, ministered to us with tots of brandy! What an excellent idea. The wind has got worse since we stopped too, and is now very... well, windy. Heavy rain is forecast for tonight too, so maybe at least that will put a bit of water back.
Posted by Sarah at 18:10