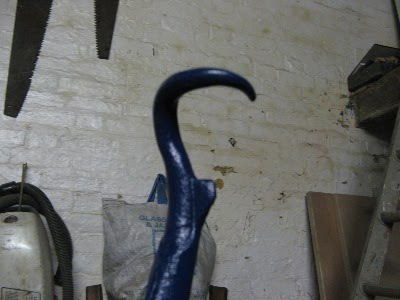 So far, we have been lucky enough not to get anything wrapped round Chertsey's prop. As we are about to visit the BCN for the first time, this charmed state of affairs cannot be expected to last much longer. Naturally, Chertsey is not equipped with anything as wimpish as a weedhatch. I have had a practice go at poking about under the counter with the cabin shaft, and I have also attempted this on Tarporley (before going down, sorry, sending Maryam down, the weedhatch). It is very hard. At least, it is very hard if you are small and uncoordinated and have weak arms and no idea where you're meant to be pointing the thing. So I approach this inevitable task with some trepidation.

Discussing this with Blossom, he said, what you want is to get hold of a shunter's pole, and he described this as bearing a sort of spiral hook which you can work into whatever ails you, and twist it round and round and get a really good grip on it, more effectively than with the cabin shaft. Sounds marvellous I thought, but how esoteric... how much call can there be these days for an implement for manually decoupling railway carriages... I shall keep my eyes open, and if I am lucky, I might find one within the next decade or two.

Then lo and behold if the very subject didn't turn up on CWF, and someone named a supplier - Richard Carter of Huddersfield, established in seventeen forty-something, and purveyor of every agricultural and engineering implement your heart could ever desire, and many more it probably wouldn't. Who knew there were so many different sorts of spade? So we rang them up and spoke the the very obliging Michelle, and soon a shunter's hook on a hickory shaft was winging its way to us. I have just taken a really terrible photo of it, but hopefully you get the general gist. Now I'm torn between excitement at the prospect of trying it out, and hoping (no doubt vainly) that the need won't arise.
Posted by Sarah at 20:29