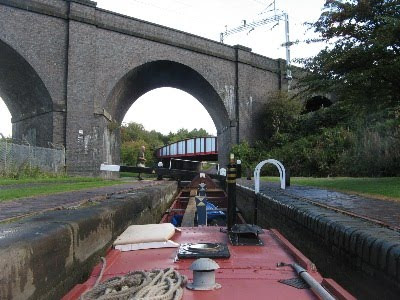 And the rest! Because of the rather abortive efforts of the last couple of days, Blossom said that we should be ready for an early start today - to leave about seven. So I set my alarm for 5.30, got up and lit the stove, did the brass which was in a disgraceful state after last night's rain, and wa sjust taking Jim a coup of tea at 6.45 when... doink, doink, doink... Minnow was started and setting off! Within ten minutes we were off to, and briefly caught up thanks to an even earlier departure (our somewhat eccentric friends on Shy Swan again) holding them up.

I did proper lockwheeling this morning, on the bike, from Shutts Hill to Gailey; nine locks and about five miles. It didn't take long for Minnow to get ahead and we were on our own. It was lovely and sunny for the best part of the morning but after we cleared Gailey it started to cloud over and by the time we got to the bottom of the 21 at 2.15, already more than seven hours after setting off, it was tipping it down. Jim had been steering all morning but I took over now, and up we went. Very soon the sun came out again, and it was really hot, so we didn't stay wet for long despite further odd showers. About two thirds of the way up we espied a familiar figure - Blossom, come back to help us. He'd made it to the top and tied up there. When we arrived, the flight had taken us three and a quarter hours. We started settling don, claening up etc. but although it was a nice enough spot there were a lot of rowdy people about (well, OK, to be technical, pissheads) and while they seemed harmless enough I could see it would annoy Jim, so how delighted we were when a BW guy came by and said that we could moor in Broad Street Basin, which is where we are now, toilets and showers on tap, and secure if not actually much quieter. Having been out for a little look round, we collected a takeaway pizza and set up the folding table and chairs, and poured a bottle of beer, and enjoyed our repast in the deserted and dimly lit BW yard. I think I'll sleep well tonight, no matter how noisy the trains, road and herberts.
Posted by Sarah at 21:44