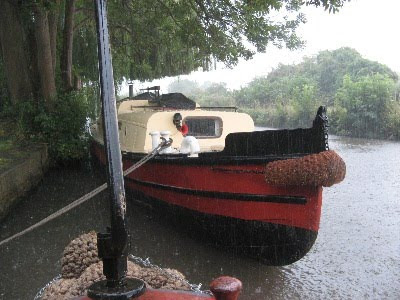 Does this look like a submarine to you? Does it really? Beautiful as it is, it must be maddening to be the owners of Sharpness, a 1908 (Blisworth?) tunnel tug. We were tied up behind it for less than a week, and I lost count of the number of people asking, mainly facetiously but some in all seriousness, 'is that a submarine?' (my mind wandering now, I'm thinking it's not an underwater boat, but an underground boat, but not a tube boat which is something else entirely...)

Thursday afternoon it was under a fair bit of water though. There can be few better places from which to watch a downpour than from a narrow boat's cabin (provided the wind's blowing the other way of course). Though I did feel a bit sheepish on Friday, once we were underway again, and everyone we met at locks was saying, wasn't the rain dreadful yesterday, and I had to admit we hadn't actually left until after it had stopped.
Posted by Sarah at 14:31