And other little jobs. 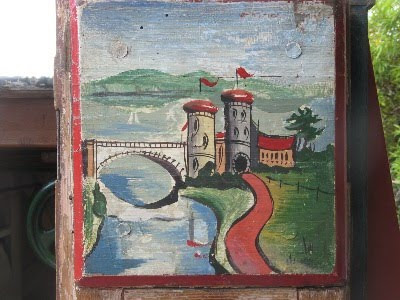 Having bought a set of nice brushes yesterday, I finally got around to putting a first coat of Craftmaster varnish on the roses and castles on Chertsey's hatches. This was a job which was long overdue. The paintings date from at least the early 1970s, and very possibly earlier. Because Chertsey was unused for so long, and the hatches shut tight, they were protected from the elements. Now the boat if being used, they are exposed to the sun and the rain and of course this is fatal to the fragile old paint, which was already starting to crack. I haven't attempted any repairs or repainting, nor have I rubbed them down at all, I didn't dare, so the patchy patina of discoloured old varnish remains. All I did was gently clean off as much dirt and grime as I could with a weak detergent solution, followed by meths. Hopefully a few coats of varnish now will preserve them in their current state for years to come. 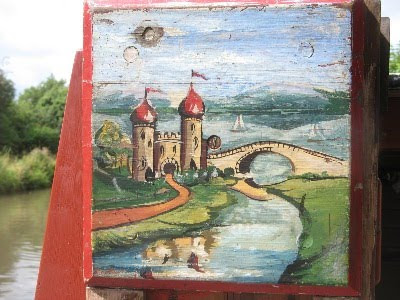 I've also been making progress with the interior painting; it is a very slow process in such a small spacem constantly having to move everthing around. Meanwhile Jim has been cleaning up in the engine room and has wrapped the heatproof bangade around the exhaust. So lots of little jobs are finally getting done whilst we're laid up here waiting for our part to be made.
Posted by Sarah at 21:03