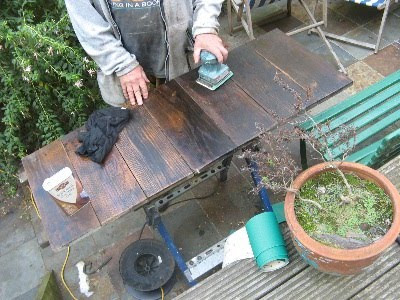 We brought the floors from Chertsey's cabin home on Saturday, to clean them up. I'm going to paint the side bits with red oxide, but the removable central sections are such nice wood - solid oak again - that they will look better unpainted. The paint would soon wear off anyway, and while I quite like that look, I like old wood better.

The floor comes out in three sections. There's a single plank that lifts out first, and gives access to the greaser for the plummer block that supports the propshaft, a short section of four planks at the back, which comes out when I want to see how much water's in the stern tube drip tin (very little lately) and the rest a larger section forward. There is a slight hitch in that I seem to have left the single plank section behind, on the bank, in the excitement of removing the larger sections. It should be sitting there waiting next time we go back... I hope. 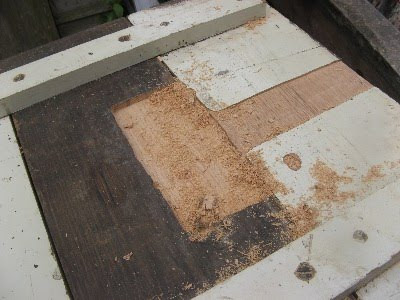 Jim has sanded the floors to remove spots of paint, old varnish and dirt, and oiled them. They still look lovely and dark and old. Also, he's got his router out and cut a rebate in the underside of the floor where it sits above the propshaft coupling, as it has been rubbing slightly. Had we had it here, he'd also have made a recess in the plank for the plummer block greaser, as when it's full the floor pivots on it.
Posted by Sarah at 15:18