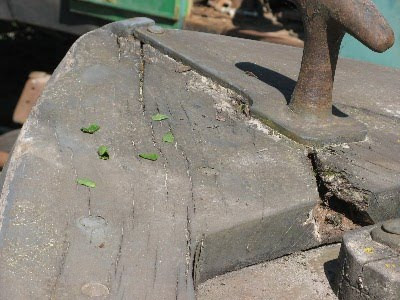 Alternative title: bees in my breast piece. Ahem. Up until now, the front end of Chertsey has been somewhat neglected; that is to say that the foredeck and its wooden cants have received no attention whatsoever. But I was prevailed upon to at least superficially clean up the fore end with a lick of red oxide (a sort of reddled sepulchre, perhaps) so this morning that was the first task I set about. As I swept and hoovered the sand and leaves etc off, I noticed a number of insects buzzing around, one of them carrying a suspicious green parcel, but as they weren't the giant hornets that are found around these parts I was more annoyed than frightened. Then, having scraped out the moss, I started to dig away at the rotten wood of the breast piece and to my amazement, bits of fresh green leaf emerged from deep within it. Suddenly I realised that the rotten wood had been colonised by leafcutter bees. I left the wood alone after that, and they came back, bringing new bits of leaf and dragging it in through a number of different entry points into what must be a warren of little tunnels and hollows within the timber. How extraordinary. I did however get the steel painted - they didn't seem at all put off by this - so it looks better than it did. What a turn-up though, and I wonder what will happen when we move off. And indeed whether these are local bees or have been in there since Oldbury.

After getting over that I returned to the back end when I put the final black paint onto the counter bands. The red and (old English) white are Sikkens paint, which is wonderfully shiny. I had to dig the old hated B&Q black out in the end though, but it turned out OK. 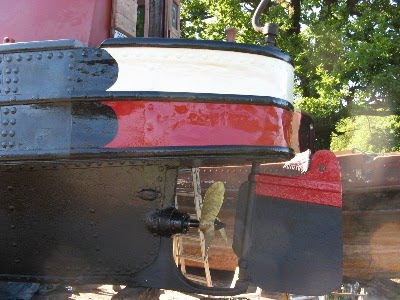 Meanwhile Jim has been in the engine room much of the day, bolting the engine down ready for the boat to be lifted in, and the propellor fitting completed. The electrics are progressing nicely. I have made the canvas tube for the cooling air outlet and Jim has attached the final bit of tinware that it attaches to.

Hopefully we will be ready to leave this weekend. The plan was for Jim to go and fetch Warrior, so that we could have comfort and cleanliness at Braunston, while I would take Chertsey. However, while I have my crew in place, he is having more trouble pinning his down... so if anyone fancies Saturday/Sunday/Monday on the Nene, do drop us a line.
Posted by Sarah at 22:18