As promised, a few (only a few because I'm still using my phone) photos of yesterday's activities, and a bit more detail. We didn't start particularly early - since the weather stopped being sunny our internal clocks seem to have decreed that we need a couple more hours in bed each morning! 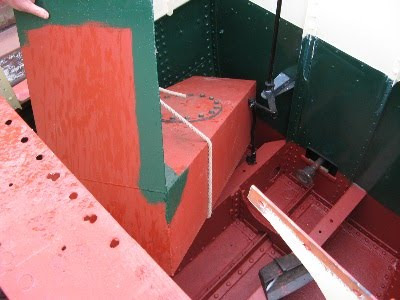 But my mid morning we were ready to roll back the tarpaulin and begin, starting with the tanks. First the old wooden bearers went back in, then the tanks themselves were carefully manouevred through the gap and into place using the crane at one end and Jim at the other - final positioning being done with a very large crowbar. Jim connected up the balance pipe without any problems, but we did have trouble getting one of the securing straps back on - there was a bit of swearing and banging, and it's still not perfect but it will have to do. 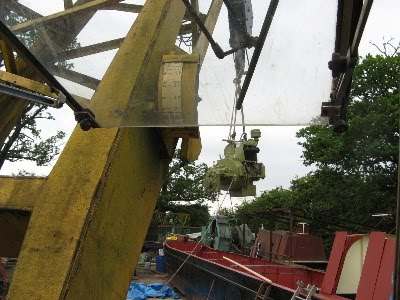 Then after lunch we were ready for the engine. This is an enormous lump and only just fits through the gap, especially as the throttle control rod was still in place. And of course it had to be landed millimetre perfect on the bearers, which were not themselves fixed. Well, all credit to Keith's precision craning and Jim's instructions, it went right first time; it's in, and the five bolts that we have left from the original six are all in place. 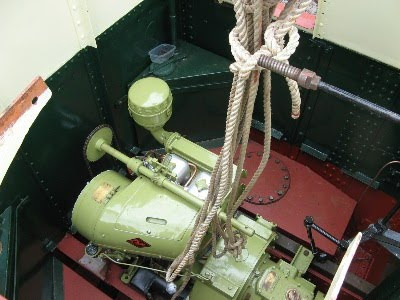 Then for the roof (which is indeed now the cabin top once again) - quite a tricky job to get that lined up with all the right parts inside and outside of the cabin sides and the various angles it's bolted to - but again it was done almost before I knew it. Then I had to step in to my traditional job of doing up the nuts, all sticky with sealant. We got most of them done last night and Jim is just finishing off the more recalcitrant ones now. We're using domed headed bolts, like those we used on Warrior. The ones we took out were slotted - and we could have got some the same - but at 60p each the requisite 150 would have worked out a bit dear. Or we could have used modern hex bolts, which lots of people do and they probably have a good pedigree - but don't look so good.

I'm back to painting duties now.
Posted by Sarah at 14:35