Change from a Shilling 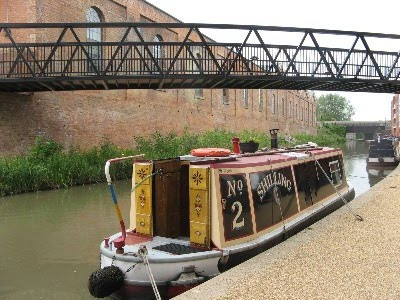 Yesterday we finally managed to catch up with Michelle and Bill on their boat Shilling. This is harder than it sounds as Michelle and Bill actually live in North Carolina and are only in Britain for a few weeks two or three times a year. This was our third or fourth attempt to make contact this trip. Firstly we were going to meet them in London, but electrical problems meant that they didn't make it there. Then we were going to catch up with them on the way back from Stretton - but Fang broke down and we ended up getting a lift and the train to get home. Then we planned to visit on Sunday and give Tufty a trial run - fortunate that we did as it was still overheating and we had to abort that mission (we had done all we could over the bank holiday weekend; first thing this morning we went and got a new radiator and all is now fine, huzzah!). So finally we said that we would get there by hook or by crook and we would go by train, and meet up with Shilling at Wolverton.

So that's what we did. Michelle and Bill always make us so welcome and are great company, sharing a deep love of boats and beer. As Wolverton itself is none too appealing (although it is a very interesting place) we set off by boat to Cosgrove to have lunch at the Navigation. It was nice to be boating again and steering the 31' Shilling made quite a contrast from Tarporley and even Warrior. Despite initially being a bit nervous, I managed it fine. Jim also enjoyed having a go and (of course) getting up a bit of speed. He even spun it right round in the middle of the canal, just because he could!

On the whole though we took it nice and steady and tied up at the bottom of the Navigation's beer garden in time for a late lunch. Not the cheapest pub food, but pretty good, and a choice of four beers. We were amazed to find that by the time we got back to Wolverton it was half past six, and not long before we had to leave to catch the train(s) back. We had just been talking the whole time. We find so much to talk about, especially things like comparing the health and education systems in our respective countries. Also, Michelle does the most marvellous patchwork, and was interested to know why, unlike crocheting and rag rug making, patchwork had never become a comon practice (at least not sufficiently to be considered 'traditional') on canal boats. I'm afraid I didn't know the answer... does anyone?

After I got back Michelle read yesterday's post about the boring calendar - inadvertently not so boring with its May picture. Jim had already suggested that the boat featured might be the one belonging to the chap who writes for NarrowboatWorld, as a couple of comments on yesterday's post have also pointed out. Michelle sent me a text to say this too - and that he was the original owner of Shilling! Not only that, but just after he had sold it, but long before they bought it, they shared a lock with him. Another one of the strange coincidences that we had been discussing only that afternoon.
Posted by Sarah at 15:14