Thanks very, very much indeed to Richard Pearson for sending me these photos, and giving me permission to post them. All of them were taken by Richard Pearson, as were the ones I've already posted of Chertsey on the Edstone Aqueduct in 1973, and on the bank in 1986. 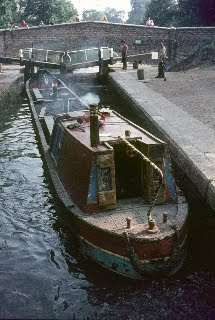 These two were both taken in 1970, and show Chertsey pretty much as when Richard Barnett bought it - as did that one on the Wey which I posted before. The tunnel bands (rather unusual?) are the same as in the 1964 Stratford rally as photographed by Max Sinclair. 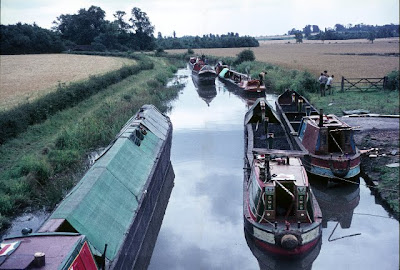 This one again shows Chertsey (on the right) loading coal at Gopsall Wharf on the Ashby Canal, to be delivered to Croxley Mill. 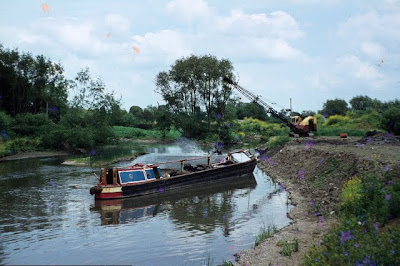 This one (above) was taken in 1972, just prior to the cabin rebuild. Richard P. tells me that Richard B. had already acquired the oak by then, from Colne public library. This picture was taken just above Barton Lock, which was then the limit of navigation on the Upper Avon. 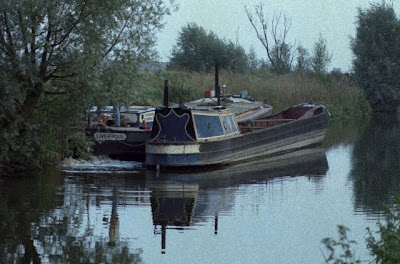 And this one shows Chertsey in 1978, with the new cabin well established. You can actually see the difference in shape, I think. Richard Pearson has confirmed that the oak framing of the cabin is original - perhaps the planked wood cabin follows the lines better than the previous ply one did. How many large Woolwiches have any of their original framing left, I wonder?

Finally, in 1986, Richard P. helped Richard B. re-rivet the knees after the major rebottoming: 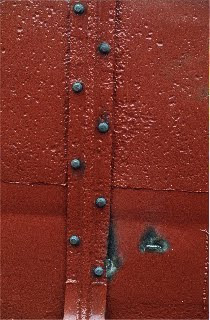 Once again, many thanks to Richard Pearson for these. I hope to meet him soon....
Posted by Sarah at 18:25