The end of a perfect week 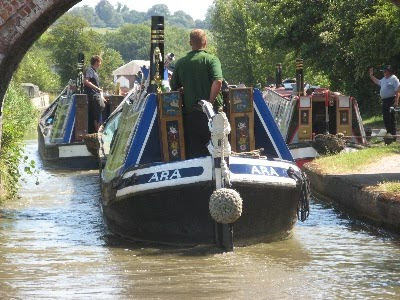 Give or take the odd bump and grounding, this week has been absolutely sublime, culmimating not only in the Braunston experience, but actually being part of it this year. The weather has been wonderful, unbelievable, both for the festival itself and the journey to it. Starting to feel part of the old working boat 'community'; having things in common to talk about. The brilliant - as always - atmosphere. As I strolled around very early this morning as mist from the canal wreathed the boats in the basin, I wondered if life could possible get any better. And when Tom and James left with their coal boats, Archimedes and Ara, immaculately turned out, I understood how those people felt who ran away to join the boats.

Life went on however, as boats either left or were locked up and themselves left, and we set off in search of some half inch stern gland packing, the box at the Braunston chandlery turning out to have been empty. Eventually we secured a length of rather grubby stuff from Tony Redshaw, which Jim has fitted (stuffed in? Whatever the technical term is). We set off from Braunston at half past one, and have averaged a very steady two miles an hour, for six and a half hours, bringing us to Hungerfield where we have caught up with Bath.
Posted by Sarah at 23:17