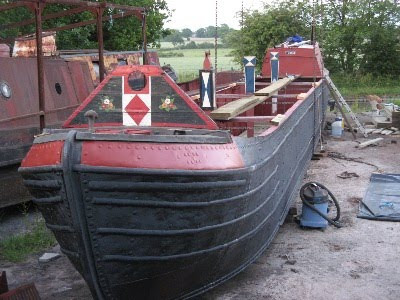 What a difference from when it was last in the crane's chains.

Today we went shopping again, and bought a set of fenders this time, as well as numerous nuts and bolts - hopefully it will be the last big expedition. Jim spent ages browsing the stock of old, quality, brass screws in Kelsalls, and came away with a selection - I think he would have liked to buy them all.

The major task today was getting on with the floors, to get them done (and the timber out of the way on the bank) before going back in the water. All was going well and Jim was very pleased with the new Triton circular saw he's bought for this specific job, when - disaster! - it stopped working. This rather threw plans into disarray and the wa we have found round it is to put the planks in lengthways pro tem, so that they don't need to be sawn. Then at a later date they can all come out again and be made up properly.

We've put the deckboard on, and it looks super. We need this to mount the headlight on! We would have liked to have built the false cratch but although we have most of the bits, there are no gunnels to built it up from.

The headlight, starter motor and dynamo are now all wired up, and we've been able to utilise the lovely old brass and ceramic switches that were already wired up in the cabin - they'll be for the headlight and the pump in the hold. I am going to cheat slightly with the addition of one 12v socket hidden in a cupboard in the cabin, to charge my phone and hopefully the netbook. If I go quiet you'll know it hasn't worked!

Finally, I shoved a tin of grease into the sterntube. Not as simple a task as it sounds as Chertsey still has the original type of greaser, which consists of a cap about two inches across and an inch and a half deep, which has to be filled with grease and then screwed down on a very fine thread (I didn't count the turns but it's a lot). To get the tin of grease in took about eight capfuls - the hardest part is getting the thread started. By the time I'd finished it was squeezing out around the propshaft so I hope that means that's enough.
Posted by Sarah at 21:44