Learning a Pole's worth 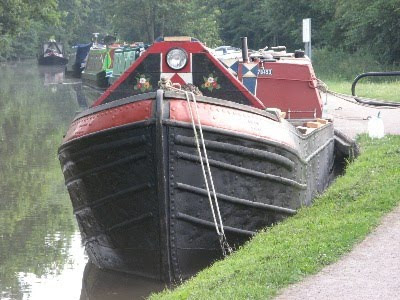 Tempted to start every post with the words 'It's been a long day' - today certainly no exception. Fairly eventful... and not everything went right. Included quite a few more episodes of getting stuck, including one entailing us calling on the aid of others. Happy endings though... Mike lost his phone on the towpath whilst walking the dogs - but someone handed it in to the police station... so he had to go back to Nuneaton to fetch it. But how wonderful that it was handed in.

All's well that ends well though and my biggest achievement today was getting round the turn at Hawkesbury without touching the bank at all... I heard Mike's voice in my head (though he was on his way back from Nuneaton at the time) saying 'reverse now'... and I did and it worked. Amazing how much I'm learning.

Anyway, spent evening in the Greyhound, of course, and need to make a really early start if we're to have a fighting chance of arrining in Braunston tomorrow. The top pound of the Coventry was very low and lots of people have been getting stuck; just hope things will be better tomorrow. Pic taken in Polesworth this morning, an eternity ago.
Posted by Sarah at 23:43