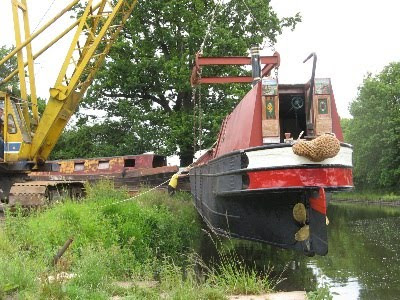 I feel I should be writing something really momentous here, but one one hand it just seems like the logical outcome of everything that has gone before; on the other, like an unimaginable achievement. Today Chertsey travelled under its own power for what might be the first tome in a quarter of a century. Yes, we really did it. At last.

The day started so long ago, with Chertsey going back into the water. After all the planning and positioning last night the actual operation (excluding stopping to take photos) took just three minutes - and how lovely it was to see the boat in the water.

Lots of little jobs remained to be done, the most important of which was the final lining up of the engine (which Jim did while I was optimistically out stocking up on provisions). Three big ballast tanks have gone into the hold, and been filled with canal water, plus our freshwater tank.

The plan had been to take a trip into Wheaton Aston to fill up with diesel at Turners, but as usual time ran away from us and by the time we realised, it was too late. Disappointing taht if we leave tomorrow we'll have to fill up somewhere more expensive but not the disaster I'd first feared as at least there are alternatives.

But we went for a trip into Wheaton Aston anyway; effectivly Chertsey's maiden voyage, with this engine and since coming out of retirement. What can I say other than it went wonderfully well. The prop, which we'd feared might be on the small side, seems perfect; the boat stops and reverses really well. It moves through the water and steers beautifully; the engine sounds great (and is very loud!) and touch wood, toush wood, touch wood, there seem to be no major problems. Minor ones are that the throttle needs adjusting (although I was getting used to it anyway) and the regulator on the dynamo may need adjustting too; we couldn't be sure it was charging. (So we'll be taking a spare battery with us in case, courtesy of Tufty.) But what a joy it was to see that boat stretched out in front of me. Toomorrow, then, we leave for Braunston.
Posted by Sarah at 23:17