One of the high spots of the rally weekend - certainly judging by the number of photographers present - was the loading of a considerable quantity (my memory for figures lets me down here as usual but it was somewhere between four and eight tons) of timber into Renfrew. And not the sort of timber you get in Travis Perkins; no this was entire oak trees, cut into 2, 3 and 4 inch thick planks. 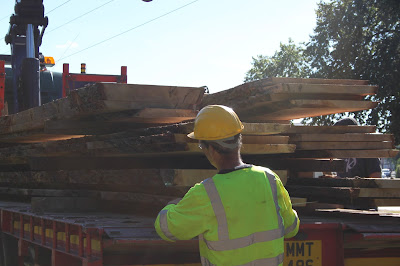 Pete, seen here inspecting - or possibly simply appreciating - his purchases, is in the process of restoring, among other wooden narrow boats, Lucy. Lucy was the last boat built by Nursers at Braunston, for Barlows. Lucy was sold on to Blue Line in the 1960s and was paired with Renfrew, and they were on the 'Jam 'Ole' - generally recognised as being the very last regular long distance carrying contract, which ended in 1970. The wood will be seasoned for a couple of years before being used - but the goal is to have Lucy ready for the fiftieth Jam 'Ole anniversary.

Fittingly, the loading took place at the site of a former timber wharf, although the consignment arrived by lorry to what was now a towpathside playground. Very impressively, the hiab was operated via a wireless remote control unit worn over the driver's shoulder - you can just see it here - he's the (terribly young looking) chap on the right. 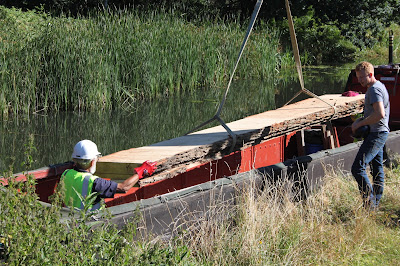 Pete had to do endless risk assessments etc. before the council would let him load there, hence the hard hats and hi-vis jackets. There was also miles of plastic tape keeping us at a safe distance. Meanwhile the hiab operator and his helpers didn't have to bother with any of that.

Andrew from the Narrow Boat Trust made this video of the operation:

While this was going on - which was on the Saturday morning - Sue from HNBC must have been doing her rounds of the boats at the rally site, because although there's an article with photos about the loading, Renfrew wasn't on the list of those boats present.

Once all the planks were in, Renfrew's crossplanks and chains were replaced, leading a passer by to ask, a few days later, how the timber had been got underneath them. He almost convinced himself that it had.