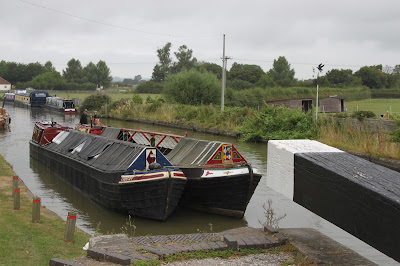 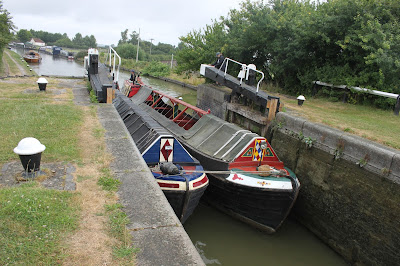 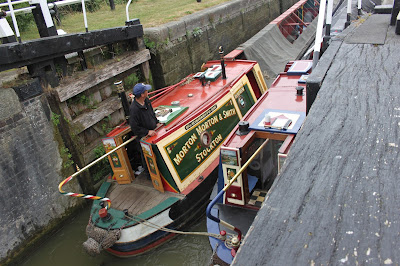 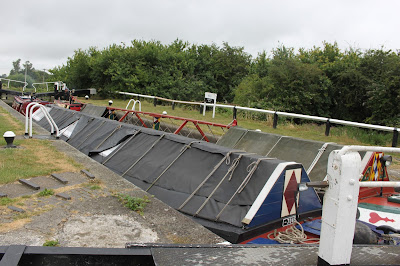 This was Seabrook bottom lock, and clearly we were breasted up for the flight of three. Often we did this just because it made it easier to position the boats in the lock, rather than one coming in first and trying to stay against the side while the other one came in, but in this case I'd clearly also got off to do some work. This was July 29th, our first full day of travelling with Renfrew and I am amazed, going back and counting, to see that we did twenty-six locks that day. I know that's not necessarily a vast number, but the seventeen narrow ones we did on our final day with Renfrew felt like a lot more (especially to Jim, I suspect). But then, two boats and four people in a big lock is less work than one boat with two people in a small one, because you have a spare person, and company.

We did quite a lot of breasting up and singling out over the course of the trip. We took the boats up Marsworth together very successfully, with me setting ahead; we tried the same thing less successfully coming down Hanwell.  Once again the boats were tied together with Pete steering, Jim and Irene worked the locks, and I went ahead to get them ready. I was nearly at the bottom of the flight when I noticed there was a lot of water coming down. I wondered whether I should go and investigate but didn't want to be running backwards and forwards so finished my task and got the last lock ready before turning back.  It transpired that one of the gates hadn't opened completely and the boats had got stuck on the way out. An attempt to flush them out - which accounted for the water - had only succeeded in lifting them up to stick higher, tipped in towards each other. Somehow - involving Pete having a self taught crash course in Chertsey's controls - by dint of serious reversing of both boats they were pulled back into the lock, and I arrived just in time to see them starting to come out singly while Irene trudged off up the flight to replace the water in the pound above. So it wasn't all plain sailing, even on the GU.

We did a fair bit of breasting up on the Thames as well, on our way back. Often coming to a lock it would have been greedy to hog 144' of landing stage so we tended to tie up to each other, and then it was easiest to go into the lock together and only have one set of ropes to worry about. Here we are doing that at Chertsey (I don't think I took photos at any other Thames locks). 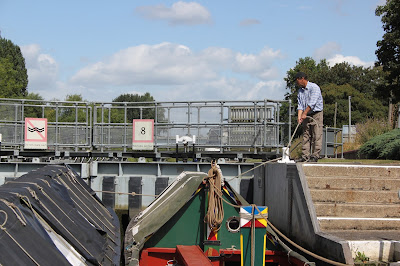 Although we parted company with Renfrew on arrival at Weybridge as they were booked up the Basingstoke on the Tuesday, and us not until the Friday, by a fortuitous quirk of organisational breakdown, we ended up tied next to them for the duration of the festival. Thus when we finally parted company over a week later it felt quite odd to be without our (non identical) twin.

Incidentally, having finished Bread Upon The Waters last night,  I have spent a lot of today reading The Quiet Waters By. At the same time, listening to June Tabor singing 'Unicorns' had me in unexpected tears - common themes of elegy and loss and yearning - which were not just for the loss of the distant (to me) past which I will never know; nor just that of the author of those books whose young self springs so vividly from the pages, but also for the much more recent past, which is no more capable of being recaptured than that of fifty years ago, for the end of the summer, and some of the best boating I have known.