On Friday August 5th we finally progressed onto the Basingstoke Canal. In this photo, taken by Jim of the Narrow Boat Trust, you can see the gauge that was used to ensure that boats would be able to get over the delicate wooden cill of the bottom lock. 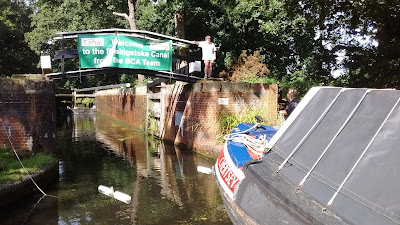 It's simple and ingenious - sunk beneath the surface of the water is a metal frame, constructed to the same depth as the cill. The white floats support its top level with the water surface. The boat goes over the gauge, and if it's too deep, it will pull the floats down below the surface. As far as I know, all the boats which came through got over it successfully - although the NBT might have had to offload some coal first.

Volunteers from the Basingstoke Canal Society, working in conjunction with the Basingstoke Canal Authority, organised things and helped us up the first lock. We then had another five locks to ascend, in partnership with another boat that we'd been paired up with. This would have been an easier task if not for the fact that the boats going up ahead of us were leaving the top gates open behind them. I was not impressed, but typically only moaned to third parties rather than the people actually responsible. I did hear one of them say later that they thought it would be OK because they thought the NBT were behind them!

To get to our festival mooring, first of all we had to go and wind. This proved interesting. The history of ownership of the Basingstoke Canal is to say the least interesting (as we discovered at a quite entertaining talk on the first evening) and there are parts of it where the BCA does not own the bank. This includes the winding hole. A housing estate has been built on the bank here and the developers have taken the gardens right up to the edge of the water, with residents' plant pots overhanging. In addition, the winding hole has not been very well designed, with the protective timber baulking at the wrong height.

Knowing nothing of this, we toodled up, and (fortunately) winded very slowly and gently, putting the stempost into the bank as usual, and managing for once to do it very gently. We noticed the residents watching us, and one of them was on the phone, but we thought nothing of it. Until, that it, we got back and tied up and found that the BCA had been phoning other boaters who had winded earlier, telling them that there had been complaints and that they had damaged the winding hole. This was roundly denied by all concerned. I also got a phone call, but I didn't answer it. There was an email waiting for me when I got home, but by then it had blown over. At the time though there was a lot of fuss, with the BCA wanting to give our details to the residents (we refused) and muttering about insurance claims and demanding apologies. I think they simply had never seen the winding hole used by a full length boat before.

The HNBC Chair, Phil, smoothed things over far more diplomatically than I would have done, and one upshot was that any boats using the winding hole in future had to deploy a man on the bank dangling a tyre on a rope to protect its delicate fabric from those nasty historic fore ends.
Posted by Sarah at 19:31