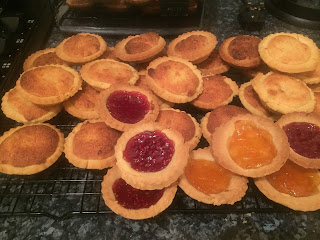 It's a bit of a tradition in our office to bring back edible treats from one's holiday. This we have enjoyed, this year, salted liquorice from Denmark, 'wine biscuits' from Greece, chocolately Frenck biscuits and a variety of fudge and shortbread from those holidaying in the UK.

I, on the other hand, would normally bring back pork scratchings (not universally popular) or Staffordshire oatcakes which, with the best will in the world, unless expertly handled and filled with something greasy and tasty, bear too close a resemblance to damp cardboard to really be considered a treat. But at least the Black Country has regional delicacies. I was completely stumped as to what I could possibly supply that would be redolent of Woking.

A quick Google, spreading the net a little wider to encompass the whole of Surrey, however, provided inspiration, in the form of Maids of Honour, also known as Richmond Maids of Honour, reputedly enjoyed by Henry VIII and Anne Boleyn at Richmond Palace and Hampton Court. Well, we boated past Hampton Court, and here we are going under Richmond Bridge,
so that is the treat I am taking in tomorrow to help keep people's strength up as the new cohort of students arrives.

There are lots of different recipes (and different stories) but I plumped for this one from Clarissa Dickson Wright, although I used shredless marmalade as I couldn't get quince jelly. The pastry is absolutely sublime - I shall be using it for my mince pies this year. Now all I have to do is get them to the office without crumbling.
Posted by Sarah at 20:29