Or, Jim's moment of glory.

Back in 2012, when HNBC had its Easter gathering at Droitwich, we (for Jim and I were both on the committee at the time) had to make a number of arrangements, including providing elsan emptying facilities. So a holding tank was ordered and set up. However, it was found that the hole in the top of the tank was rather small, and the top of the tank itself a bit high off the ground, to make the task of emptying one's receptacle easy or convenient - especially for those who favour the more traditional design of engine 'ole facility. Jim's contribution - welcomed by a grateful multitude - was to find a traffic cone and cut the top end off to make a giant funnel. A ladder was also procured, and while emptying the bog was still quite difficult, it was no longer as risky.

Imagine my delight, then, to see the the Patent Droitwich Funnel was once again being deployed at Woking. 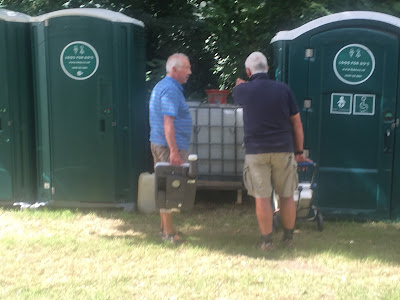 The appalling photo quality is because I took it on my phone. From a safe distance.
Posted by Sarah at 19:48