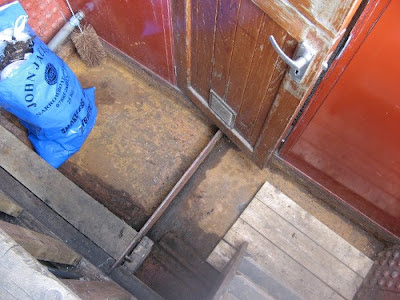 Yesterday Jim started ripping out some of the woodwork and decking in Bakewell's front well deck so that we could see what lurks beneath. This was prompted by the fact that when we fill the water tank, if we're not careful, we get water overflowing into this space and emerging mysteriously from behind the boards. Hence the floors had already been taken up in the small remaining area that can truly be described as a well deck, revealing a rather rusty but sound baseplate and knees. 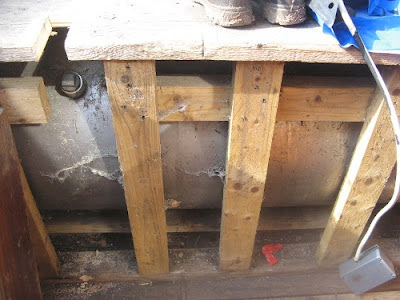 We could see that there was a newish stainless cylindrical tank towards the front of the boarded area, but didn't know what was behind it - the answer, two older water tanks, rectangular with removable lids - maybe 50 gallons apiece. We stuck the hose in the filler and and after a long while (it will only fill very slowly) our patience was rewarded by the sight of water overflowing one of these tanks, seeping out under the lid. 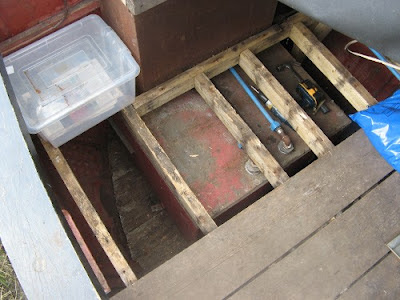 These are the original tanks, and the stainless one was presumably added later to increase capacity. The pipework had us very confused for a while but it seems that they all fill from the bottom, via the same pipe that runs to the water pump, making it interesting if you turn the tap on while it's filling (don't ask me to explain, but if you do, it behaves as if it's empty and just keeps running, making all sorts of air-type spurtling noises). All the uninsulated pipework is a complex network of breathers.

I am loath to take the tops off the old tanks, as they will no doubt be crying out for cleaning, blacking and whatever other unpleasant tasks can only be done by small people. Nonetheless, it will have to be done, if only to seal it properly.

Then we have to clean out underneath as best we can, and get some Vactan or Fertan down (I've never used that sort of thing before but I know people speak very highly of it, and given the nature of the space there's not a lot else we can do. Then the well bit at least will be blacked, as this is where any rainwater collects, and some smart new floors made, using the wood be bought to make temporary planks for Chertsey.
Posted by Sarah at 17:14