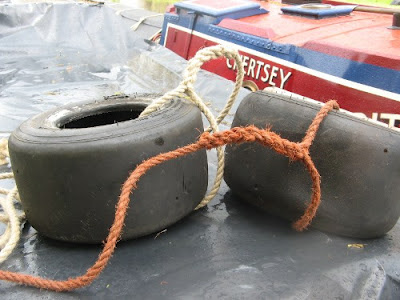 I think it is fairly widely known that I hold the view that side fenders are, to put it mildly, much misused and greatly over-used (and I will not put it any less mildly in case you, dear reader, are a fan of them. See how diplomatic I'm getting?).

However, there is one situation in which the deployment of a bongler* can bring some benefit - when you are tying up for more than a few hours against another boat or a piled bank. This has nothing to do with protecting your blacking, let alone your paintwork, and everything to do with reducing irritating banging and grinding noises, especially when it's windy and you're trying to sleep.

So today I have finally got around to fixing up a couple of bonglers to go between Chertsey and Bakewell; go-cart tyres salvaged by Jim, to which I have spliced (yes, spliced. No untidy knots for us!) some bits of string, and Jim is tying them onto Bakewell's handrails as I write.

One of these tyres was very useful at Droitwich for hanging over a bolt protruding from the piling, where a wooden strake had rotted and fallen off; further along, where there were two more, I banged a couple of pins into the bank and hung a plank from them. A bit of scraping on the hull I don't mind, but I do draw the line at a puncture.

*Thanks to Izzie for that wonderfully descriptive word for them.
Posted by Sarah at 13:45