This afternoon Jim set about painting a couple of cans. The one on the left is for Chertsey and was very kindly given to us by Dave and Izzie on Bath when we first got Chertsey. The one on the right came with Bakewell (whence it will return), and was, amazingly, originally painted by Phil Speight. You can just see the remains of one bunch of roses; the rest of the paint has completely fallen off. Hopefully this will not happen so easily next time as Jim is priming the galvanised can with Blackfriars etch primer. Both of these are going to be painted simply (nay austerely) in bands of red and blue, separated with cream lines. Eventually I shall get them written with the respective boats' names.

We do now have quite a collection of cans. 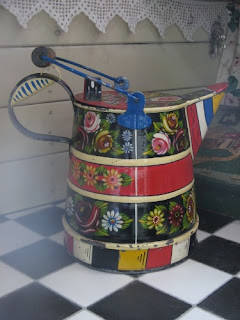 This was the first one. Jim bought it from the Kennet and Avon Canal Trust shop at Newbury as a boat warming present for Andante. It rather looks as if it might have been done by a student of Phil Speight. It's little, at, I would guess, one gallon, and probably wasn't intended to be used - but actually it's the one that gets used most for something near its proper purpose; it's ideal for filling up from the tank in Chertsey's hold and keeping in the cabin. 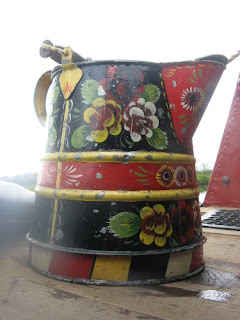 This one was bought in a junk shop in, of all places, Lewes. It cost £27, and one of my few regrets in life is that we didn't buy the full size milk churn that was on sale for £48.


And then there is the accidental Phil Speight can I had done for Warrior, for Jim's Christmas present. That's in hiding at home at present, following a rather too close encounter with a bridge. The can has been repaired, but still needs repainting.

And no, I don't like the new bloody Blogger interface either, except, I think it may let you insert a photo wherever you choose rather than having to move them around afterwards.
Posted by Sarah at 17:24