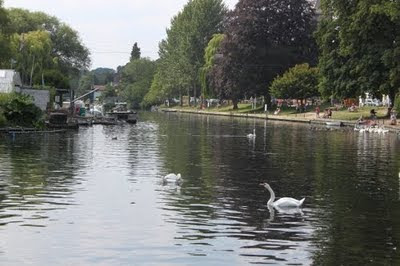 Yes, I was in Durham last week, taking pretty pictures of the River Wear. I didn't achieve what I went there for, but I did get a very nice jacket and a Monsoon skirt in the Age UK charity shop. On the other hand, I also managed to lose a cardigan which I rather liked. That was a fairly distinctive view, I guess, to anyone who's been there, so how about another puzzle. This is the river I was sitting by yesterday... I can't think of any clever pun on its name this time, but I will say it also has four letters. 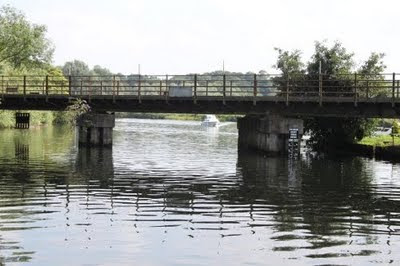 Further kudos for naming the pub whose garden the photos were taken from :-)

PS. I've finally got round to changing the masthead photo... Many thanks to Cath on Sickle for taking this and other super action photos at Braunston.
Posted by Sarah at 10:47