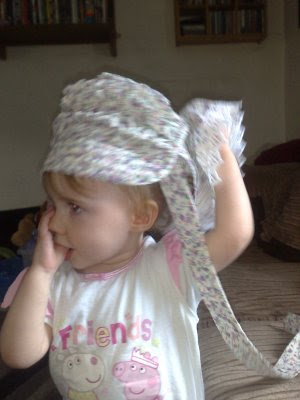 When Eloise came to visit us at Braunston, the sun was beating down and her mum and dad were not best pleased that she refused to keep her hat on. Ah, I thought, what she needs is an old fashioned bonnet that ties under the chin (nice wide straps, not nasty cutting elastic). I wondered whether one of the craft stalls would have one for sale, but no. I found the next best thing however, on the Lichfield and Hatherton Canal Trust's stand - a diy bonnet kit, which I purchased as Eloise's (first) Braunston souvenir present.

Well, today I finally got round to making it. The kit came with plain white fabric, which I didn't really fancy, so yesterday I bought something a bit prettier, a nice old fashion printed cotton, and used the white pieces as a pattern. The instructions were mostly easy to follow, though I was glad I had some experience of sewing, putting in gathers etc as they were not very detailed. It was quite fiddly, because it was so small, but the finished product was quite impressive with all its frills and furbelows.

Naturally, Eloise still didn't want to put it on, so here is Tweenie the teddy modelling it instead. 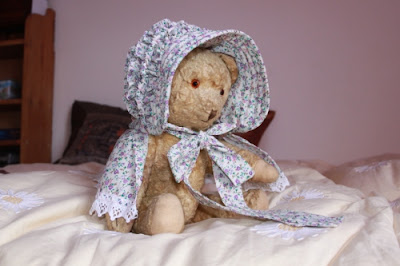