A lot can happen in five years 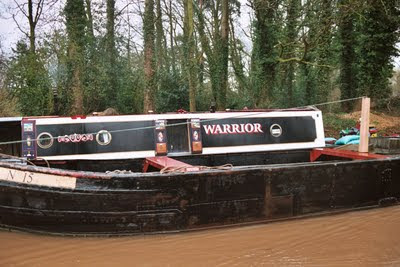 I almost hate to admit it, it makes me feel like such a parvenue, but it was five years ago about now I first recall encountering old working boats. Close encounters in some cases, as we had rather unwisely (or innocently) chosen the week before Easter to bring the recently purchased Warrior from its old mooring at Golden Nook up (that doesn't sound right in a map sense, but in a canal sense it is) to Stretton.

One of the things that needed attention was Warrior's engine, which was on average firing on one of its three clyinders; the other was the gearbox, which was very chary about engaging reverse. (A third urgent requirement was to get rid of the horrible paint job, of course.) Just what you need when you're still a bit of a nervous newbie and there's all these big beautiful beasts coming the other way. If I'd known then what I know now... but of course I didn't, and we had quite a few hairy moments, and spent a lot of time running down the towpath warning people of our approach. I think the best bit was with Bernard Hales's tug and at least two day boats, including one which was being bowhauled all the way. He was very nice about the ensuing melee.

Could I have imagined back then that a mere five years later I would not only own one of these beauties, but would be confidently steering it towards Ellesmere Port for the Easter Gathering...
Posted by Sarah at 19:56