Staircase locks still make me furrow my brow a bit. They're OK when I'm on the bank - no problem on the Chesterfield - but we've had some fun with the big ones on the Shroppie. Bunbury was the site of an early mishap on Warrior, and the reason I think anyone who cruises with side fenders down doesn't know what they're doing. On our return there we met what looked like a pair of seasoned boaters - overalls, beards - who turned out to be anything but. The chap with the biggest beard had just bought his own boat, and the other guy, his mate, was a supposedly experienced boater who'd come to help him and show him how it was done. All I could do was warn Bigger Beard that his friend was in danger of wearing his bowthruster out for him before he even needed to use it. By the time they gone we were so discombobulated that Jim forgot to empty the bottom lock before the top one. Prior to that a couple has been going down and had offered to share but at that point I was less confident about the width of the locks (I now realise it's only Beeston Iron Lock that's problematic) so declined. I don't know if it would have been good or not to have them with us for the rest of the way, as they insisted on emptying the lock at no more than a trickle. Now I can understand some people being cautious about filling a lock slowly, but going down? 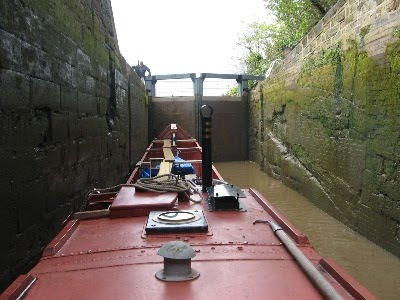 The middle lock of Northgate Staircase, where I thought I might have to take up permanent residence

Then there's the Northgate Staircase of three locks going into Chester, which we had never traversed before. No problem here remembering to do them in the right order, but lots of grief with a stuck paddle and getting a level between the second and bottom locks, and then more fun getting out of what are rather short locks, which finally entailed me taking an impromptu shower in order to hoick up the button fender to enable me to finally get Chertsey's nose past the gate of the bottom lock. And thus I made my triumphal and dripping entrance into Chester. 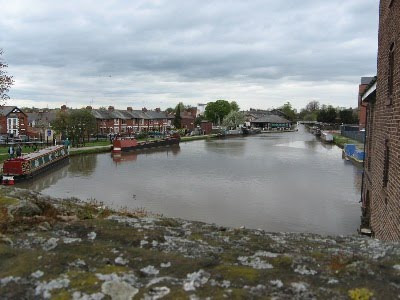 Here's Chertsey in the basin 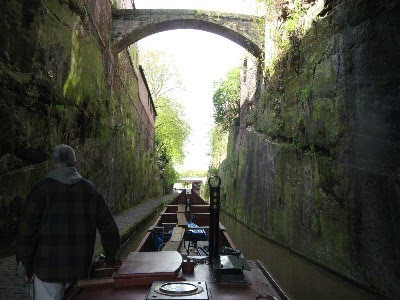 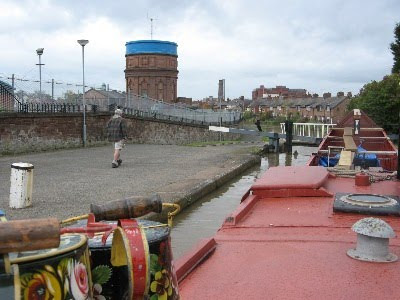 And two gratuitous pictures of our approach into Chester
Posted by Sarah at 21:58