Grease is the word

And oil, and diesel, and paraffin. A nice day of petroleum based products. Firstly Jim went off to Turners at Wheaton Aston to get diesel. We are really lucky being moored near this cheap and helpful garage, but we still didn't take the boat - couldn't be doing with winding twice before setting off. We'll be passing them in the morning of course, but they won't be open then. Jim went in the car with our collection of containers. He also took the opportunity to buy about 20 litres of paraffin, at about half the cost of the 4 litre pre-packs.

Then we had to change the oil. Jim had removed the old oil yesterday, and today I helped him put the new stuff in, finally getting to open my 25 litre Morris's tin - it was once I had that that I knew I was a real boater! We thought it would take about ten litres but it actually swallowed a fait bit more with its extra-large BW sump. Then he greased all the relevant bits of the engine room, and I attended to the stern tube and prop shaft plummer block. 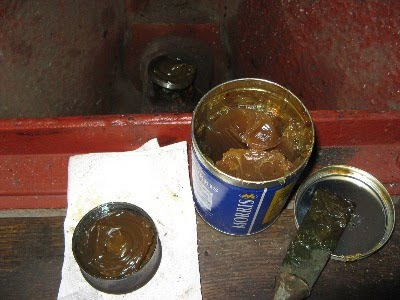 These have the original cap type greasers. You unscrew it to remove the cap, then fill this up with grease. Of course it doesn't hold anything like as much as a modern greaser so you have to do this quite often. Then it needs to be located on its very fine thread, which is the hard part, and start to be screwed down.This is directly into the stern tube, you can just see it in the dark in the photo above. A turn or two a day when you're boating until it's screwed right down, and then do it all over again! Further back there's a plummer block picking up the propshaft, and this has a similar greaser, which I really should remember to give a trun to more frequently. I just thought I's write about that for people who'd not come across them. 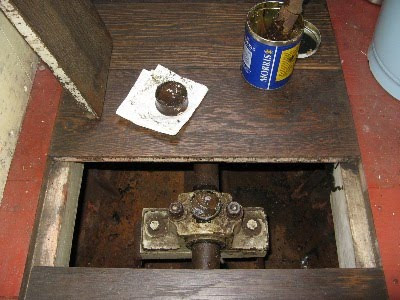