Not that I'm competitive

But I must confess to being gratified, as well as amazed, to see Chertsey zooming up the charts in the last few days, culminating in the dizzy heights of actually overtaking (by a few clicks) the venerable Bones last night. I certainly never thought I'd see that day. I took a screen grab to save the moment for posterity - fifteen in the overall chart and FIVE in the blogs chart. I can't see it getting any better than that. 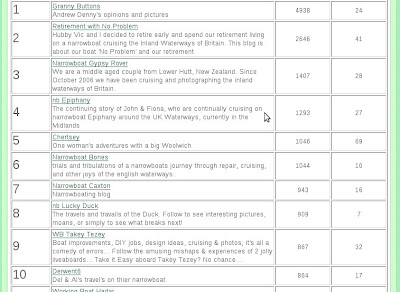 It's fascinating following the chart, and Chertsey's progress in it. It really does seem as if more people look when I write about something interesting - particularly Chertsey itself (which is nice), than when I'm just wittering on to fill space - but how do you know it's going to be interesting, before you look? Or is it that on the more substantial posts, people look more than once, come back to make a comment, see if there have been any new comments.

Because that is something I have been really chuffed by - the fact that so many and varied people are commenting. My first experience of blogs - one I stumbled upon completely by accident (yes, I know - science! Me! I found it while searching for information on Amitai Etzioni, and that day it featured a post about how wonderful the stoical British response to terrorism was... and I stayed for the atheism, although I hadn't visited for ages until today. It hasn't changed much, and I'm going to go back and have a read as soon as I've posted this) - was characterised by the informed and often heated conversations that went on in the comments, and that's always stuck in my mind as part of what blogging is about - a conversation, not just a series of one-way announcements. So if you read this but haven't commented yet, why not say hello? It would be lovely to know who else is out there.

So, I bet it'll start slipping down the chart again now I've posted this load of empty ramblings. Never mind, I've had my moment of glory.
Posted by Sarah at 10:19