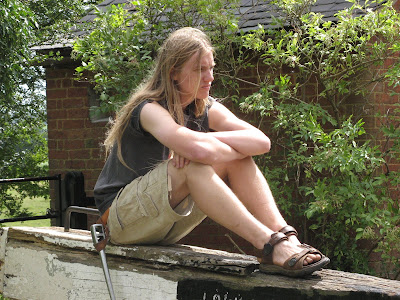 Baz has hair. Baz has had hair for a very long time. Ever since his first, rather drastic, haircut at the age of two, I swore never again. I kept it half heartedly trimmed until he was about six and then decided - as long as he was happy about it - to just let it do its own thing. Throughout his childhood this was a bit of a battle with his other parent, step parent and grandparents all assuring him (and me) that he's be much happier looking like all the other boys, and threatening him that he'd be bald by the time he was twenty. I for my part assured him that this wasn't true, that short hair for boys was a relatively recent fashion and that he was adorable the way he was. Despite all the pressure on him - and the teasing he did get at school - Baz never wavered. He loved his hair. He has grown up into an absolutely smashing, lovely young man, open, very confident and very much his own person.

And he has started thinking about cutting his hair. Maybe he's proved his point. Maybe he's fed up with the washing and the brushing and the gallons of conditioner. Maybe he just fancies a change. A few years ago I would have been aghast - but now, knowing that it's his own decision, I'm just a bit sad. But all things come to an end, and once you get it into your head that you fancy a change, it's very hard to resist. I have warned him that I may not recognise him, however.

All is not lost though. When Baz told his friends that he was considering this radical move, many of them (mainly female, it must be said) begged and pleaded with him not to. Never one to miss an opportunity, Baz has now decided to auction his hair, in aid of an autism charity. Basically, people can pledge money for him to keep it, or to cut it off, and whichever 'side' raises more money, that's what he's going to do, and keep it that way for at least a year. He's set up a website to handle the rush of responses and pledges. At the end of the month, after his twentieth birthday, he will do the deed. Or not. It all depends upon the will of the people.
Posted by Sarah at 16:56