A home to go to 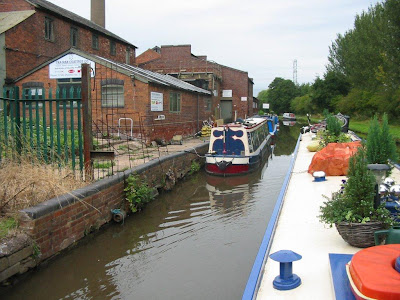 photo courtesy of Mike - I never took one, of course.
Following on from yesterday's cliffhanger (yeah, right), my new mooring agreement arrived in the post this morning, so I have signed it and sent it back, and hopefully (provided they don't mind waiting a little while to see my insurance, ahem) it will all go ahead.

Thanks very much to Blossom for keeping his ear to the ground, Chertsey will tie up on a home mooring just behind Minnow, at Kings Bromley Wharf on the Trent and Mersey. It's a long way from home (but where isn't) but it's a lovely central spot canal wise and though I've taken the mooring sight unseen (been past it a few times but never really looked), the fact that it has water, electricity and secure parking, and is offside and gated, would seem to make it a good bet. I was never 100% happy about considering towpath moorings, although I did of course and they probably would have been fine. But for hardly any more money than those were going for this seems to have a lot more going for it.

Also I like the fact that it's a proper wharf, with a bit of history to it. I hope Blossom won't mind me paraphrasing (from memory) the brief history he gave me - the site was originally a creamery, and used the wharf for deliveries of coal from Rugeley. It's now an industrial estate, so a big contrast to the rural splendour of Bill Fen, giving us the best of both worlds.

It'll still be a long(ish) time before we can make our way there of course (but the mooring agreement doesn't start straight away) but it's nice to think that Chertsey has a fitting home to go to.
Posted by Sarah at 18:22