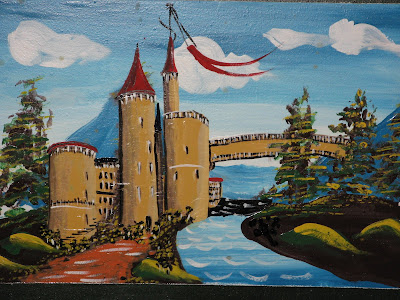 We all arrived full of enthusiasm, bright of eye and very bushy of tail despite quite a snow fall overnight. Without exception we all found Saturday tiring but were looking forward to what we all perceived to be the more difficult of the two days. And so it proved......as the landscapes are more technical by far, full of shading and perspective as well as Bradford Bean Can Theory. We did however have one major problem, the room was considerably colder than yesterday so much so that the paint was not drying properly despite us using proper quick drying flat paint. This is necessary, otherwise the various colours will either bleed through or drag, this should only happen if you want it to. Phil was getting frustrated by the slow progress caused by the non drying paint so he arranged for Zita to bring over the office halogen heaters which which was all well and good but he neglected to tell us that the office heating had broken down and poor Zita had to do her work of reorganising the office in the cold, so respect to her as yoof of today would say. These heaters made a world of difference and our work quickly dried enabling us to try and catch up what Phil estimated was a loss of over an hours 'production' meaning that we were unlikely to finish our work properly. We pressed on, fueled as yesterday, by copious quantities of tea, biscuits and rolls and more tea. Success was in sight at last and almost on time as well but we still had to endure Phil's bear hunting joke, and endure it we did and him being the son of a music hall comedian. 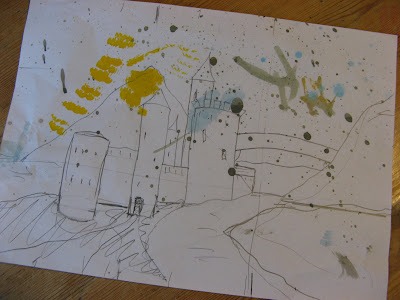 Please note : for a much more objective appraisal of this wonderful weekend please keep an eye out for Jill's forthcoming article in Canal Boat complete with pictures in glorious technicolour.

For those whose appetite has been whetted there are just four tips that I would like to pass on:
Don't ask how you can paint egg cups, teaspoons or flat irons
Don't say Alfa Romeos are Fiats only rustier
Don't ask are there any Italian motorbike makers?
or say Formula One is rubbish.

Other than that sign up and enjoy.
Posted by Sarah at 17:04