The next instalment of Jim's adventures... in which paint finally gets a (small) mention
Woke up to a perfect day which augured well for the labour ahead. Leapt up, chucked some cold water on my face and put the kettle on. Strains of giggling from up stairs alerted me to the fact that Wriggle and Bones would soon be appearing. Several cups of tea drunk and a bowl of Mort's
Oatbix(?) devoured we were all ready for the day and off we set in the Volvo laden with large quantities of rolls and good intentions.

On arrival at the Stourbridge Canal Wharehouse, the venue for our weekends fun, the rumours of much chillyness proved fortunately false.
Some of our fellow 'students' were already there and a finely cheerful and positive lot the were too. More tea, biscuits and general banter, an introduction to the wonderful* Meg Harvey, Phil's former apprentice and off we went. Phil's passion for the subject was clear from the start and
a silence that you could cut with a knife enshrouded the assembled throng - this was the natural course of events over both days, somehow Phil's very casual manner held us all enthralled despite regular mobile calls from some people installing a paint mixer breaking the spell and his general inability both to work his mobile and find his glasses, Each process, there were about 8, was explained and demonstrated and then it was our turn................. and an even greater silence ensued, as we all sort to put into practice each of the seemingly simple? processes.
There was none of the usual mickey taking or competitiveness, just surprisingly focused work. Much tea was consumed, biscuits eaten and at lunch 'our' rolls received a surprising good reception.

Met up with Tiggy Madcat, a fellow 'student', who owns Halsall, a big Northwich which spent a considerable amount of time in Chertsey's company at Les Allen's in Oldbury but now lives in Hawne Basin, lucky thing. Not only did boat talk but she said she was a big fan of the heavy rock music, especially the Groundhogs, a band with whom I had a short term aquaintance. We were all inspired so lunch was short and we were soon hard at it again, although still somewhat confused by the elusive roses or flowers as they should be known as. Everybody had achieved the same level so far, a tribute to both the tutors and the concentration and hard work of all the participants. The roses continued to evolve but not as we would know them and certainly not with the 'life' of Phil's but press on we did until as if by magic and following the final process our 'roses' came to life with a general and very particular satisfaction. 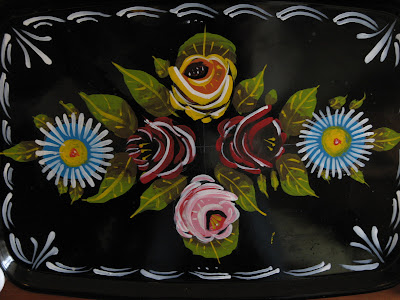 Our work done for the surprisingly tiring day we drove back to Jill's for some food and in anticipation of a or several well earned pints.But before we went out we had to prepare tomorrows food for the class. Jill had decided that there should be some cold sausages which we were instructed to wrap in either foil or cling film which we signally failed to do because we were utterly useless, dropping most of the sausages on the floor, which in turn caused us, Mort and I to fall into an almost catatonic state of hysteria so much so that 48 hours later my face still hurts and my eyes are still sore from the tears of mirth. The situation was recovered by instructions from the kitchen but even so it was fully five minutes before we were able to move. Beer was however calling fairly loudly and as well as being able to choose a boat builder Jill can also choose a pub and it was to the Railway Arms that we repaired. A truly wonderful pub developed out of Bridgnorth Station platform buildings of the Seven Valley Railway, some of whose engines and rolling stock can be viewed for Jill's house. 10 hand pumps, none of which I knew, a really good mild and a very eclectic clientele including, to complete a mini banter Caspar Ghost and his brother Kevin who extraordinarily had carried on a family tradition of making their own narrowboats from scratchin their garden complete with nice old engines
- a Ruston and a Dorman both bought off ebay. A good evening was had by all but we were not too late as our eyes and tails had to be nice and bright and bushy for tomorrow to paint our landscapes
* This was the word Phil used which proved very true.
Posted by Sarah at 15:12