I had a lovely piling chain once. It came with Andante. It was stainless, and the rings were welded onto the chain, not attached with shackles. We managed to leave it behind on the Trent and Mersey, and I was quite upset at the time.

We bought some more, lengths of chain with a ring shackled to each end. To use them, you have to wriggle one of the rings behing the Armco, fish it out of the water, and pass it through the other ring, then pass the rope through the smaller ring. It's ok - and a lot better than a nappy pin - but the annoying bit is the shackle which, being at right angles to the ring, always manages to get caught on the way out. Anyway, we managed to donate one of these to Grendon dock, so I had the opportunity to pursue an experiment - I'd already tried this with a bit of chain and a carabiner shackle that were lying around, and it seemed to work, so we invested a little over eight pounds at Tradline to come up with these: 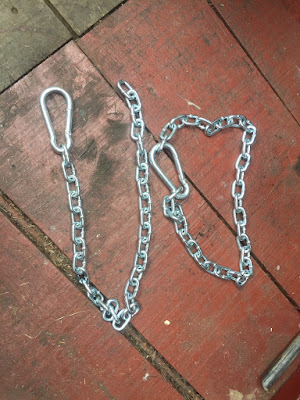 All you do is dangle the chain down the back of the Armco, catch it, and attach it to its other end. So that's easier. Then the rope goes through the big loop of chain: 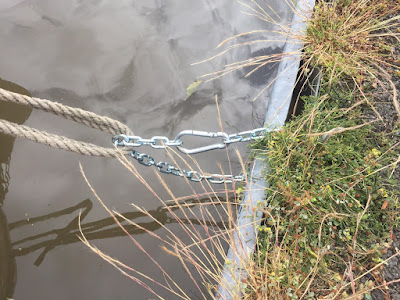 Easier again. The only way it might fall a little short is that I found it (on the basis of one attempt) that it wasn't quite so easy to pull the rope back through. It might also bother some people that it can easily be undone without untying the rope - an occasional concern, I suppose (although I've found that when people want to untie you, they usually manage to do just that - and it isn't an immediately obvious thing to do), but also, possibly, an advantage (as I nearly had to put to the test when Jim disappeared before untying the rope from the fore end t-stud, which I can often barely reach).

And a great deal more secure than a nappy pin.
Posted by Sarah at 20:51