The flat that I shall shortly be leaving is one of six, in a large Victorian house that has been in the same family since the 1940s. A few years ago, in the basement, I came across a mahogany cabinet, with a mirrored back and glass fronted sides and doors. It was in poor condition, but I fell in love with it (I do love a bevelled mirror, especially if it's surrounded by mahohogany). So I asked the landlord if I could have it in my (nominally furnished) flat. He readily agreed, and I believe it had belonged to his mother.

So I gave it a good clean and recovered the shelves, which were dressed with faded and worn green velvet, and set it up in my living room, to display my nice glass and small collection of curiosities (and not so curious things - and not the rivet collection, that's different). 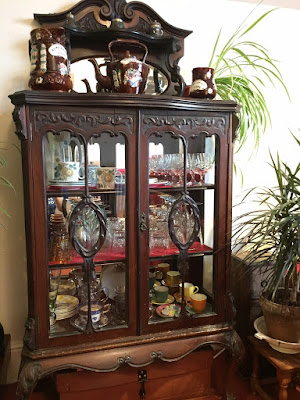 Here are just a few of them. 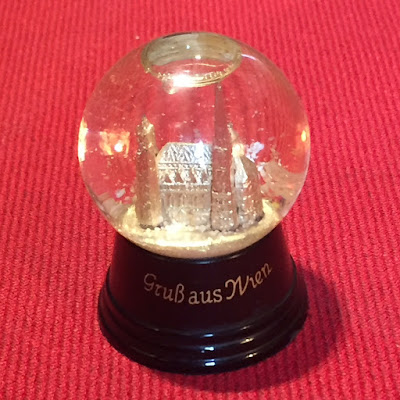 A souvenir of Vienna, brought home by my parents in the early 1960s. This lived in their cabinet when I was a child, and was one of the things I was allowed to get out only when ill. I was fascinated by it. 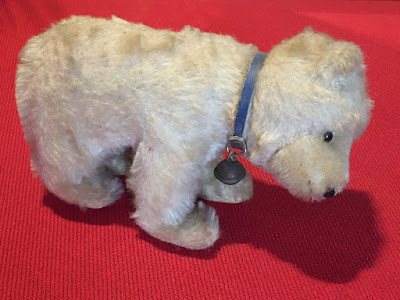 It may well have been on the same trip that they bought Wolfgang the polar bear in Salzberg. Handling him was another rare and treasured priviledge. 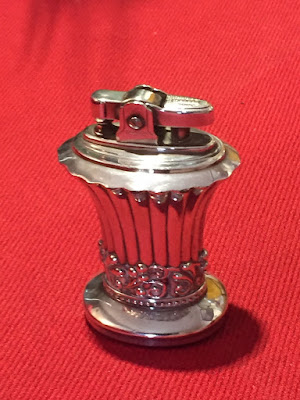 This was my father's lighter, which lived on the table next to his chair (my mother likewise had a table by her chair, but a pocket rather than a table lighter). He smoked Woodbines, heavily; she Players No 6. He started smoking in the army, when he was told, on being promoted, that he should grow a moustache and take up smoking in order to look sufficiently mature for his new rank. 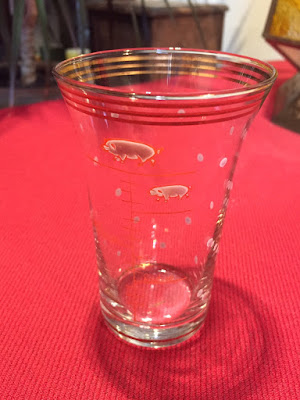 Finally something else which tickled my fancy as a child - and as a rare treat I was permitted to use this glass, which was also my father's. I don't know what drink it's intended to measure, but it has gradations up the side which are labelled in increasing order of size: Ladies, Gentlemen, then a small pig, and finally a large pig at the top.

Fortunately these treasures will not be rendered homeless when I laeve the flat, as I have done a deal with my lovely landlord to buy the cabinet, so it will shortly grace the front parlour of my new house.
Posted by Sarah at 20:28