So, after seven years, Chertsey has finally been blacked again (mind you, I reckon it was four times that long before the last time). This time we didn't do it ourselves, but had it done in the dry dock at Grendon - and I'm very pleased with the result. 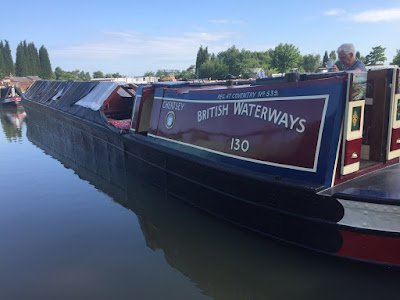 As a compromise between the Comastic we used last time (and on every previous boat) and the most basic product, we decided to try SML Ballistic Black which was gaining popularity among the boaters at Alvecote. Laurence said it was the first time they'd put it on an old boat, and he was so impressed he then used it on his josher, Lynx. It goes on thickly and takes quite a long time to cure, but looks very good. They certainly did a nice neat job. 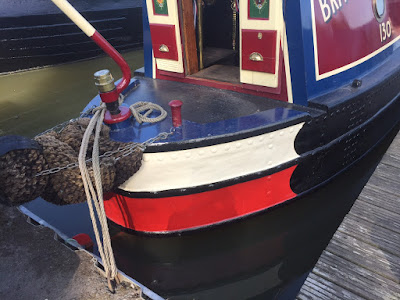 The same goes for the tunnel bands - I think they look so much better and more 'right' now.

Finally, I asked Laurence if they could repack the stern gland - this never got done properly when I first had Chertsey. Again this seems to be a very good job - and what impressed me most of all was that you wouldn't have known anyone had been in the cabin - when I came back it was exactly as I had left it, despite the fact that everything would have had to be moved off the floor. That shows a kind of respect for the customer and for the boat which really stands out.
Posted by Sarah at 21:29