Ricky was a hit with everyone at Braunston of course, and started many conversations. A surprising number of these were with other people with long dogs various. There must have been at least a dozen of them. To start with, there was Enceladus' Buzz and Bertie, and Monarch's Rosie; at least four different whippets - with one on whom Ricky had a fabulous run around the Dog Field, two or three more retired racing greyhounds; a fair few lurchers including the local Bramble, HarryDaughter's Ziggy and a lovely little Bedlington/whippet called Sid... I wish I had thought to photograph them all. But it only struck me towards the end of Sunday, so here is a photo of Grace, with whom Ricky was quite taken. 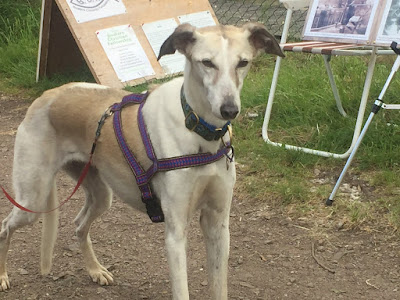 Apologies to those I have almost certainly missed out.
Posted by Sarah at 20:56