Not quite the Holy Grail

But close. I have found a National Milk tin. Unlike the one in the antique shop in Salts Mill, this one wasn't sixteen pounds. It was seven, in the local 'vintage' charity shop where I bought some other tins and a teapot a couple of months ago. I must confess I was heavily tempted by another teapot this time but I resisted. So far. 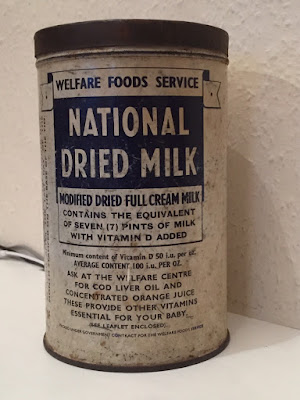 So why the search for a National Milk tin? (Especially as I already have a perfectly nice Ambrosia one, which is of exactly the same dimensions.) Only that it's the National tin that was 'traditionally' deployed as an extension to the stove chimney. I'm sure other brands would have also been pressed into service, but maybe they were less ubiquitous. The instructions for making it up are quite terrifying, involving as they do adding quantities of sugar - but hearteningly this rather ancient tin reads 'Breast feed your baby if possible...'  Having a little browse, like you do, I discover that National Dried Milk was not in fact withdrawn until 1976. A report in 1974 suggesting that it might not be all that good for babies was seized upon by the press and, it would appear, the manufacturers of proprietary baby milk brands to promote their products as superior. But questions were asked in Parliament about what the withdrawal would mean for poorer families who were dependent on it given that National Milk, in 1976, cost 20p for 20oz, while proprietary brands were up to 85p for 16oz (I got that from online Hansard).

If looking for other ways to stunt your children's growth, you could always take up smoking. My father used to smoke Woodbines, but they weren't available from the duty free - at least not the places we went, i.e. Guernsey, so post holiday twice a year he'd work his way through 400 (or whatever the allowance was - it didn't seem to last long) Senior Service. Likewise, he was a dedicated Bells drinker, but would make do with duty free Teachers. 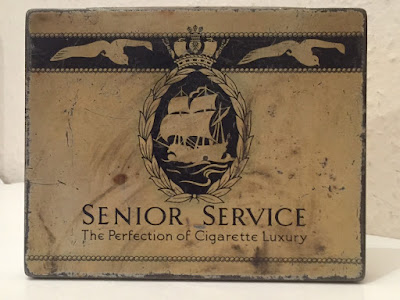