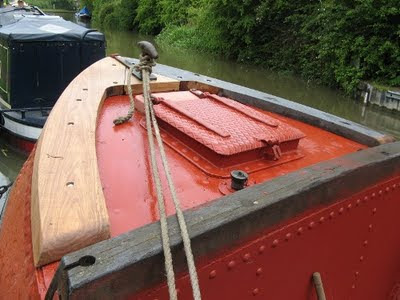 I did that last quick update when I went into work on Friday evening; with five minutes to spare before rushing off to a class, it was somehow easier to write like a breathless four year old. (The inspiration was in fact Sebastian's first composition, which I can recall verbatim to this day: 'Today we went to Beachy Head and I saw a dead badger and I enjoyed myself except for the dead badger').

Now back at home and the woodwork nearly complete, so I will now try to do it justice. The planks in the foreground of the photo in the last post are Chertsey's. The narrower ones each became two sections of gunnel, and the wider ones were destined to become a front cant, and the wider gunnel sections towards the front of the boat. The gunnel pieces were sawn to shape and finished, then clamped in place so that the bolt holes could be marked. These were then drilled and recessed - a slight communications slip up here, as there were initially three options - to leave the bolt heads proud; to recess them and cover with oak plugs, which would add a lot to the cost, or to recess them more shallowly and fill with epoxy resin. I'd initially intended to go for option one, with option two as second choice; by the time the recesses were drilled, I was committed to option three. However, it will probably be for the best from a practical point of view; I am just not so sure how it will look. 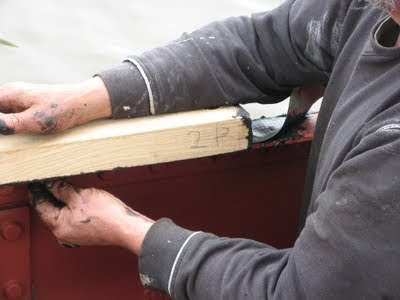 Once each section of oak was cut and drilled, we painted its underside and ends with bitumen. Then Jim spread a layer of bitumen mastic on the gunnel iron, and over the top of that, laid a strip of impermeable membrane. This is to provide a barrier between the oak, which will leach tannic acid, and the steel. The bolt holes were then punched through this, and the gunnel fixed in place with stainless steel bolts (and nuts and washers) - a total of 134 for the gunnels alone. At the front, where the gunnel rises and widens, the rise is achieved through laying shaped pieces under the main gunnel, which is cut and shaped from wider planks. These are yet to go on.

However, the handrails are all now in place, and the back end beam has finally - after a lot of struggling - assumed the curve of the cabin top. The front cants too are in place - one of the old ones was in perfect condition and has been reused - the only alteration has been to round off the end so that a rope is less likely to catch on it. This one is made of some sort of hard wood - probably mahogany - and we think is a replacement fitted in Richard Barnett's time. The other one, which was oak and quite rotten, was probably considerably older. A new one was cut to match and a new triangular piece for the middle to complete the shape. These were all bolted on into a bed of mastic, and the T-stud replaced. The deck beam is fundamentally sound and the damage around the bolt holes is going to be repaired.
Posted by Sarah at 21:46